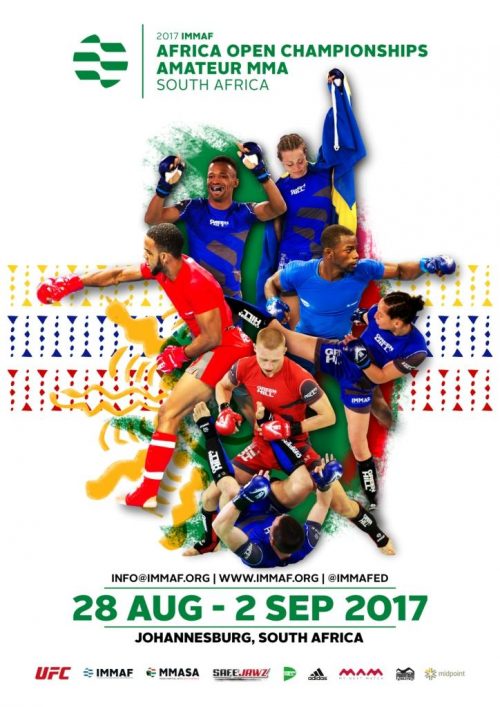 (London. 8 June 2017) The International Mixed Martial Arts Federation (IMMAF) and Mixed Martial Arts South Africa (MMASA) announce the return of international, Amateur MMA to Johannesburg for the 2017 IMMAF Africa Open Championships. This year’s continentals are set to play out from 28 August to 2 September.

The event announcement marks the fourth and final in IMMAF’s 2017 calendar: The nation vs nation, Amateur MMA tournament commenced its year in Sofia, Bulgaria with the 2017 IMMAF European Open Championships. As it heads to Singapore for next week’s inaugural IMMAF Asian Open, the prestigious, annual World Championships has been formally announced for Manama, Bahrain.

“MMASA offered once-in-a-lifetime hospitality last year and created a welcoming, home-from-home atmosphere for the international teams. Besides the experience of the competition itself, which saw our first Africa medals awarded, participants were given the opportunity to go on safari and to go skydiving among other tourist pursuits, which all added to the package and provided a memorable, and personalized experience.”

“The 2016 IMMAF Africa Open proved a successful first event, over which participants enjoyed an Africa experience that went beyond the competition itself. It was a privilege to welcome international athletes to compete with regional talent, broadening the experience of those that may never secure the finances to travel to Europe, the United States or Bahrain. We look forward to the competition growing year on year.”