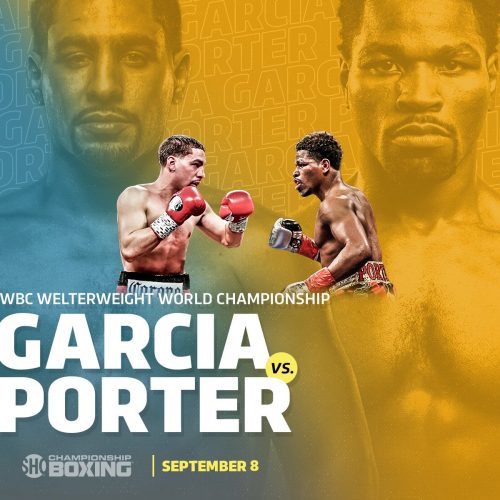 In the countdown to the September 8 fight between Philadelphian Danny Garcia and Ohioan Shawn Porter, who will contest the vacant WBC welterweight title, the pair discussed the upcoming event in a presser.

Porter (28-2-1, 17 KO’s): “I’m aggressive, I come strong, I come fast, I come hard. Danny is one that’s a little bit more patient, finds the shots that he wants and throws them and lands them. On paper, it’s a brilliant fight.”

Garcia (34-1-0, 20 KO’s): “I’ve got to go in there and dictate the pace of the fight and fight my fight. I can’t go in there and basically get caught up in his fight. … Me and my father [Angel] have a perfect game plan to get away from the head butts, so we have some tricks up our sleeve.”

Garcia is coming off a nine-round knockout of Brandon Rios in February in Las Vegas; Porter leapt into the ring immediately afterward and challenged Garcia to this fight. The two opponents clearly saw that night differently when asked to grade Garcia’s performance.

Garcia: “I give myself a ‘B.’ I was off a year before that fight, so I feel like I knocked off a lot of rust. … Winning by knockout was definitely the goal. I felt like that was the only way to win that fight — by knocking him out — and that made me feel good.”

Porter: “Honestly, prior to the knockout, it was a ‘C’ performance from me. I thought he was not as fast and sharp as I expected him to be. If that’s Shawn Porter vs. Brandon Rios, no disrespect to Brandon, but that fight doesn’t go nine rounds. … [Danny] found the right punch at the right time, he landed it, he knocked [Brandon] down and I stood up. That was what I needed to see from Danny in order for me to get in the ring and do what I did. If Danny doesn’t knock out Brandon, I don’t get in the ring, and this fight may or may not be happening right now.”

Although his record includes two prior losses, Porter has never been knocked out. Garcia said he hopes to change that.

Garcia: “If it doesn’t go to a scorecard, that would be a great thing — you never want to leave it in the hands of judges. If I go in there and stop him, it would feel great. I’ve stopped a lot of people for the first time in their career, so it won’t be the first or the last time I do that.”