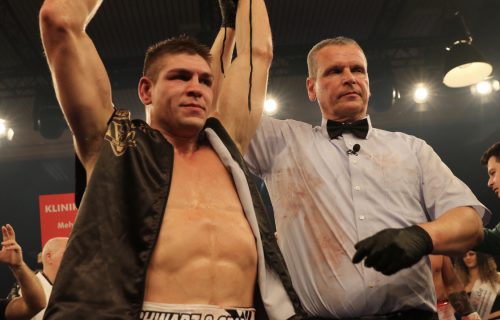 “My goal is to fight for World titles,” “I want to test myself against the best boxers in the world, and I believe I am ready!”

In his hometown of Karlsruhe, in front of a sold out crowd at the Ufgauhalle,  Feigenbutz produced a mature performance that belied his 23 years.

Feigenbutz dominated from the opening bell with a measured yet powerful display, which saw referee Joerg Milke wave off proceedings in the fifth round following another vicious onslaught from the young German.
With 48 knockouts between them, it was unlikely that the fight, billed as ‘The Battle of Karlsruhe, would go the distance, and while Feigenbutz improved his impressive 84% knockout ratio, Opalach suffered his first knockout defeat. 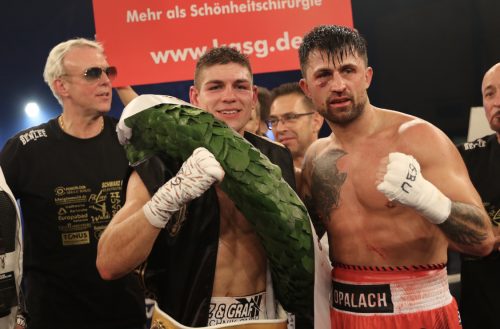 With 2019 getting off to the best possible start, Feigenbutz plans to continue his impressive rise up the super middleweight ranks as he sets his sights firmly on World glory. “My goal is to fight for World titles,” said Feigenbutz. “I want to test myself against the best boxers in the world, and I believe I am ready!”

“That was another impressive performance from Vince,” said promoter Nisse Sauerland. “He showed his maturity, and proved once again, why he is one of the most fearsome punchers in the division. There are a lot of exciting fights out there for him, and as he showed tonight, he would be a serious test for any of the big names in the division. It’s now our job to make those fights happen!”

On the undercard, Araik Marutjan produced the KO of the night as he caught his resilient opponent Islam Teffahi in the final round with a devastating looping right hand that had Teffahi asleep before he hit the canvas. The impressive victory saw the Ulli Wegner trained fighter and 2016 Olympian move to 8-0