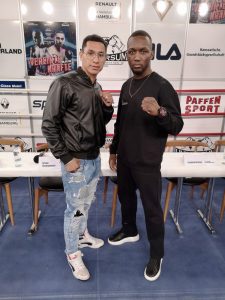 Abass Baraou (8-0, 5 KOs) went head to head with Mexico’s Abraham ‘Pitbull’ Juarez (16-4, 6 KOs) for the first time at today’s press conference ahead of their show topping fight on Saturday January 25th at the Work Your Champ Arena in Hamburg, Germany.

Following a successful 2019 that saw Baraou claim four wins, including a victory over former World Champion Carlos Molina for the WBC International Super Welterweight strap, the undefeated 24-year-old is hoping 2020 will be the year that elevates him closer to a World title shot.

Baraou, who has fond memories of Hamburg having won a bronze medal at the 2017 World Amateur Championships in the city, is hoping to create more history on Saturday night as he aims to triumph over the dangerous Juarez. 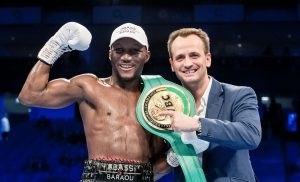 “It is very special to fight in Hamburg, since I had one of my biggest successes here a few years ago, when I won the bronze medal at the Amateur World Championships,” said Baraou. “It is an honour for me to fight on this historic event having Germany’s oldest and most historic stables promoting a show together!”

Juarez returns to the ring following a second round KO victory over Arturo Herrera in November, and the 23-year-old is confident of claiming his seventeenth professional victory on Saturday night.

“I came here for the win,” said Juarez. “I have watched a lot of video and I know where Abass’ weaknesses are. I’m ready to go and I can’t wait to return to Mexico as the winner!”

The monumental event will see Germany’s oldest promoters Team Sauerland and Universum co-promote a show for the first time in history and feature stars from both stables.

All the action from the Work Your Champ Arena will be broadcast live on SPORT1 in Germany and Viaplay in Denmark. 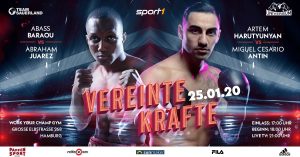