BOXING ALWAYS REMINDED ME OF A GAME OF CHESS!

‘Boxing always reminded me of a game of chess where your fighter has to execute the right moves. But, in addition, a trainer has to be a motivator as well as a tactician. The trainer is the boss in the corner and should be the only voice between rounds.’ 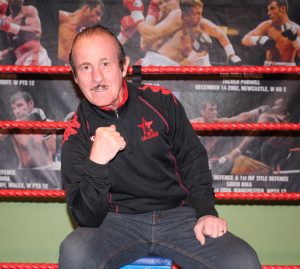 Watching fights like the Nick Blackwell v Chris Eubank fight made me reflect on times spent in my son Joe’s corner during big fights. When he fought Mikkel Kessler at the Millenium Stadium Joe began eating uppercuts. The uppercut is a devastating punch to deliver and land, and it’s a sickening punch because of the power generated, chin to brain.

I remember shouting to Joe ‘ Joe another uppercut and you’re out, turn around spin around, don’t take the shots. As a trainer I always sought to ensure my fighters evolved their tactics as the fight unfolded. It’s what we did against Kessler and it worked! Staying focused when there is so many distractions around the ring is key. For the Kessler fight the Millenium Stadium was filled with 50,000 spectators, but I only felt the presence of three people; myself, my boxer and the referee. You have to blank everything else out.

WHEN TO THROW IN THE TOWEL

A trainer has to exude confidence. During the Sakio Bika fight at the MEN Arena in Manchester, Joe got cut above the eye, the worst cut of his career. I could see the deep wound but concentrated on telling Joe to continue to boss the fight against one tough guy. I bumped into Bika a few years back at an awards presentation in the USA, he came up to me, smirked and said ‘ Joe had style ‘. Mutual respect between fighters is nice to see.

The only time I ever threw in the towel in the ring was the night Gary Lockett fought Kell Pavlik, June 7th 2008, in Atlantic City. Gary did well enough for the first round, but Pavlik started unloading with big shots and by the third round I decided to put a stop to the fight and threw the towel in. I respect Gary as a trainer.

One of the best examples of a trainer looking after his fighter was when Muhammed Ali, or Cassius Clay as he when was then known, came to London in 1963 to fight Henry Cooper. Cooper poole-axed Ali with a devastating left hook and the future world champion returned to his corner groggy. Somehow, Ali’s glove appeared to have a split which became much bigger after Angelo Dundee, his trainer, had gone to work on it! They had to hunt around for a replacement glove, buying Ali more time to recover. I always felt that Angelo Dundee was a great trainer, and in the modern era I rate Teddy Atlas.