Fes Batista visited Russell Hall Primary School this week during the celebration assembly to talk to the children about anti-bullying. Batista is an anti-bullying activist who trains and lives in the United States of America.

The young boxer who was born in Huddersfield moved his career to the states and began making a splash in the world of boxing. Batista, when not training, spends the rest of his time working and promoting the World Boxing Council’s Anti-Bullying programme. 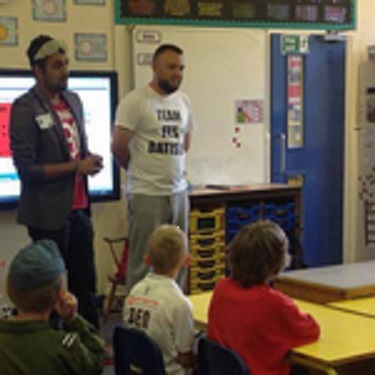 Batista is no stranger to Russell Hall Primary as he has visited the school before to speak on the issue of bullying. He told the children boxing turned his life around after he had experienced being bullied when he was young.

The assembly included an anti-bullying song that was sung by three of Russell Hall’s students. Fes Batista then ended the assembly by donating his famous shades.

“It was great to have Fes Batista come and talk to the children about bullying.

“Fes has worked with the school for several years and has helped to ensure that the anti-bullying culture remains high profile at Russell Hall.”