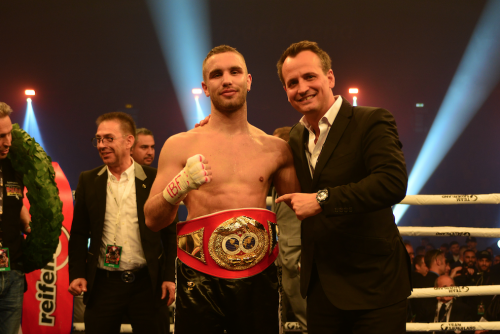 Leon Bunn (14-0, 8 KOs) will defend his IBF International Light Heavyweight title against German rival Enrico Koelling (26-3, 8 KOs) in a huge domestic showdown on November 2 at the CGM Arena in Koblenz.

Bunn claimed the IBF title with a vicious ninth-round TKO win over Leon Harth on May 4 at the Fraport Arena in Frankfurt, and is looking forward to making his first defence against his former Team Sauerland stablemate Koelling.

Koelling, who represented Germany at the 2012 Olympics, is a former WBA Intercontinental Champion, who challenged Artur Beterbiev for the IBF World title, and most recently fought Dominic Boesel for the European crown.

“My last fight was a special night for me, to headline in front of thousands of fans in my home city was a night I will never forget,” said Bunn.

“I’m looking forward to defending my belt on November 2. Enrico brings a lot of experience into the ring and has shown his talent before. He can say whatever he wants, but I will let my fists do the talking in the ring.

“It’s going to be a great fight that all boxing fans can look forward to. I will defend my title and move on to achieve my next goal. Enrico Koelling cannot stop me!”

“Bunn is overrated. He hits a lot but doesn’t have any power,” says Koelling. “The time of the unbeaten ‘wannabe’ champions is over. A champion is someone who learns from his defeats and grows. Leon will have that chance after we fight.”
Bunn is backed by legendary trainer Ulli Wegner, who has been in the Frankfurt fighter’s corner since his professional debut in 2016.

“It will be an exciting fight and it’s one I’m looking forward to. I know Leon and I know Enrico, both are boxers who are looking to move forward,” said Wegner.

“Leon is unstoppable in my eyes. He wants to go all the way and achieve the maximum success. He has the determination and I am firmly convinced that he will beat Enrico.”

Promoter Nisse Sauerland is looking forward to returning to Koblenz following the success of Team Sauerland’s February 16 show at the CGM Arena.

“Leon Bunn against Enrico Koelling is a massive fight for German boxing,” said Bunn’s promoter Nisse Sauerland. “Enrico has fought for the European and World titles and Leon Bunn is one of the most exciting contenders in Germany.

“This is a real 50/50 fight between two of the best German light heavyweights and I can’t wait for fight night!”

‘Fighting For Future’ on November 2 is a special event that will see ticket revenue and money raised from the evening donated to three charities: Laughing Hearts, a charity that provides support and opportunities to children affected by poverty, Parents’ Initiative for Children with Cancer Koblenz, who provide support to the parents of children suffering from cancer in Koblenz and Education Unlimited, an education charity who encourage diversity and training across Europe. 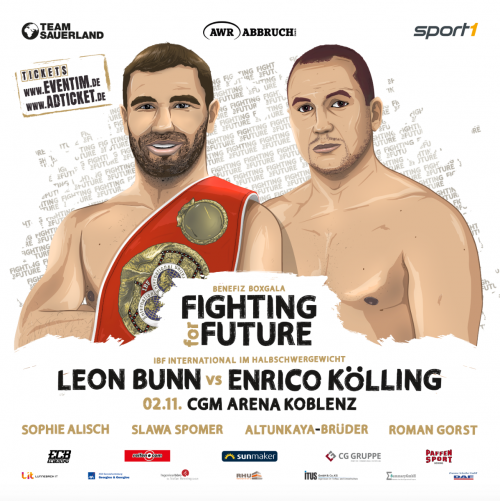 All the action from the CGM Arena is available to watch live on Sport1 in Germany. Tickets are available online via www.eventim.de, www.adticket.de and www.westticket.de.