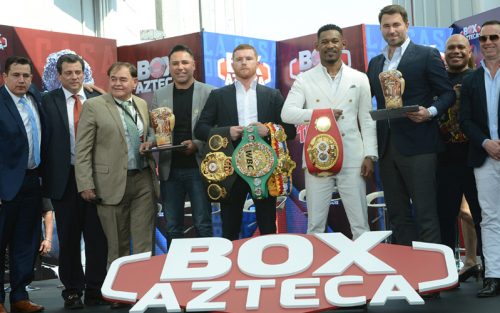 Looking more like Wall Street bankers than tough hewn stripped down fighters, Saúl “Canelo” Alvarez and Daniel Jacobs showed mutual respect at TV Azteca in Mexico City, but each man said decisive victory would be theirs in Las Vegas, on May 4th…with Canelo promising a KO! 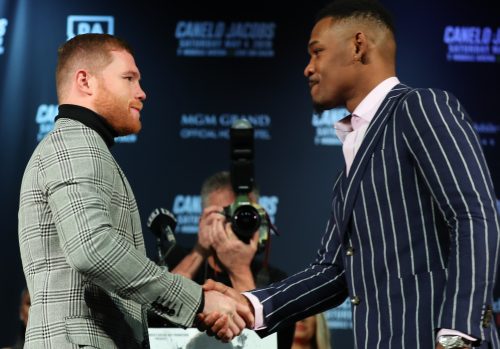 Golden Boy Promotions supremo Oscar De La Hoya summed it up as: “A great unification. I love it. This is a fifty/fifty fight.” And both already looked in fabulous shape. Daniel had seemingly borrowed John Travolta’s pristine white suit from Saturday night Fever, while Canelo was more conservatively attired in a charcoal gray suit.

At stake are Canelo’s WBC and Ring Magazine belts.  While Jacob’s IBF belt is on the table.  Canelo came to podium last, during the introductions.  There was mutual respect, but no hand shake between the two rivals.

Matchroom Promoter Eddie Hearn, who’s promising to buy a home I’m Mexico City soon…said: “We want to thank Golden Boy and Canelo for accepting this huge challenge. DAZN are an amazing partner and we’re only just getting started.”

“Canelo has a tattoo on his arm saying no boxing no life. This demonstrates the passion for boxing in Mexico. Danny Jacobs is not only an amazing boxer, but an amazing man. After beating cancer hec was told by his doctors he would certainly not fight again. He stands before us today prepared to take part in the biggest fight of the year.”

Daniel Jacobs who thanked the Mexican people for a magnificent and hospitable welcome said: “my family is my biggest motivation. I love you guys. This fight means everything to me because of the caliber of fighter I face with Canelo. It’s the best possible fight you guys can see, come May 4th. We will give our all in that ring!”

Canelo thanked all of the Mexican and international media for their support and turning to Daniel, he also thanked him.

Canelo said: “For me it’s a great honor to represent Mexico. I’m training one hundred percent dedicating myself. I will have a difficult opponent in front of me, but I’m going for the KO to remain champion.”

World Boxing Council President Mauricio Sulaiman said: “It’s a very difficult fight, in which the level of competition is very high. Jacobs brings great motivation. He defeated cancer and he’s ready to go in and give it all inside the ring. Canelo is in the best moment and it’s just great to see champion vs champion in the ring.” 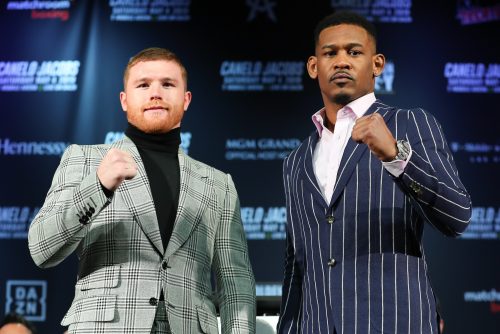 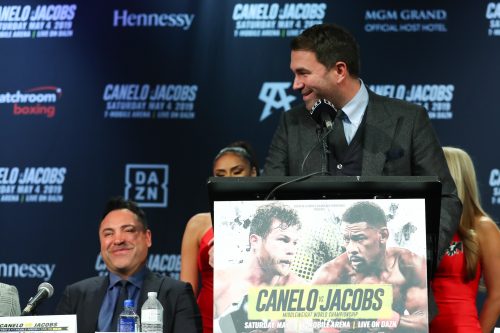