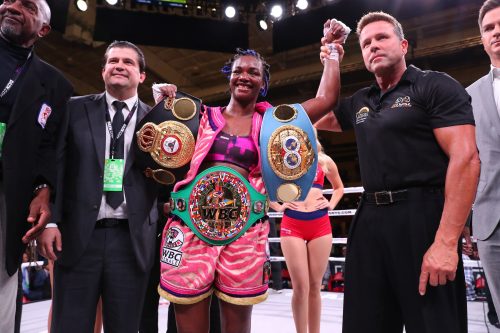 “I am thrilled and honored to receive the Fighter of the Year award from the Boxing Writers Association of America. It is a dream come true, and it furthers my goal to lift women’s boxing to new levels,” Shields said.

In a pivotal year for women’s boxing that saw the sport reach more people than ever before, two-time United States Olympic gold medal winner Claressa Shields continued to soar, as she successfully defended her two world middleweight titles, then added three super middleweight belts before the end of a campaign that earned her the 2018 Christy Martin Award, which is given to the Boxing Writers Association of America’s Female Fighter of the Year.

“I am thrilled and honored to receive the Fighter of the Year award from the Boxing Writers Association of America. It is a dream come true, and it furthers my goal to lift women’s boxing to new levels,” Shields said.

“In 2019 my goals are to become undisputed champion, to be ranked in the top 10 pound-for-pound list regardless of gender, and to continue the march of women’s boxing toward equality with men.”

The 23-year-old from Flint, Michigan becomes the second winner of the award, which was established in 2017. She will be honored at the BWAA’s annual award dinner, which will take place in 2019 at a site and date to be determined.

“In such a big year for women’s boxing, it wasn’t a surprise that there were so many worthy nominees for this award, but in 2018, Claressa Shields took things to a new level by becoming a two-division world champion and successfully defending her titles at both 168 and 160 pounds in Showtime and HBO-televised bouts,” said Thomas Gerbasi, chairman of the BWAA’s women’s boxing committee. “That’s impressive in its own right, but the fact that she’s done this all before her tenth pro fight and under the glare of the spotlight that comes with being the face of the sport in the United States made her a unanimous choice for this year’s Christy Martin Award.”

Joining Roy Jones Jr., Andre Ward and the late Emanuel Steward as members of the USA Boxing Alumni Association Hall of Fame’s Class of 2018, Shields began the year on a collision course with WBC middleweight champion Christina Hammer, but first she finished up her business at 168 pounds by successfully defending her IBF and WBC titles with a shutout victory over Tori Nelson in January. Next was Shields’ middleweight debut against Hanna Gabriels in June, and what followed was a Fight of the Year candidate that saw Shields rebound from the first knockdown of her career to win a clear-cut decision. Soon after, the news came that Hammer had to withdraw from her November clash with Shields due to injury, but “T-Rex” didn’t slow down, as she defeated Hannah Rankin and Femke Hermans to successfully defend her middleweight titles while adding the WBC crown to her trophy case.

Read more on Claressa Shields:  ‘ I was Gifted To be a Boxer ‘ (prior to defeating Hannah Rankin) HERE 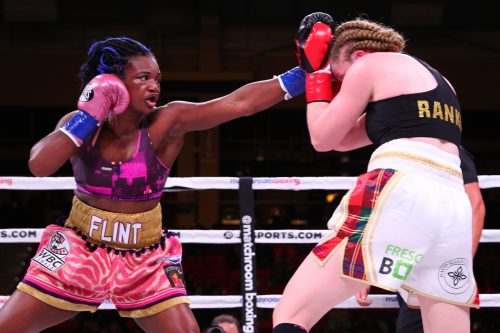