And so another fascinating fight weekend is upon us here in Cardiff – the current capital of British boxing – and once again it was the deafening roar of the Matchroom machine that was heard rolling into town at the start of the week.

But this time it was not the Joshua juggernaut heard cruising along Boulevade de Nantes, but a new breed of boxing event by the name of JD NXTGEN – the JD Sports link up that’s helping Matchroom Boxing to showcase the next generation of up-and-coming fighters who are still operating at a local level. 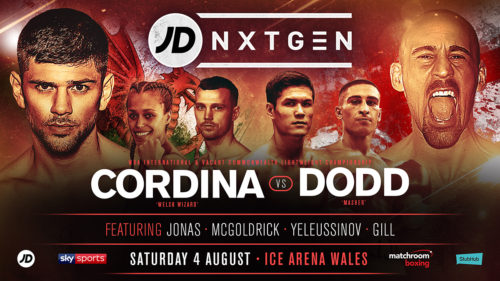 Cardiff’s own Joe Cordina will face off against Birkenhead banger, Sean “Masher” Dodd, at the top of the bill, followed by an array of local talent such as Sean McGoldrick, Nathan Thorley and Kody Davies, with Liverpool’s Natasha Jonas looking to edge another step closer to a showdown with Katie Taylor.

But wait… who’s that coming over the hill?

Well, unless Eddie Hearn has used his share of boxing’s first ever billion-dollar deal to invest in an age-reversing super-serum, it would seem there’s a new bloke banging the big drum as the mighty Matchroom media-circus looms into view…

So welcome to Wales (croeso i Cymru!), Mr Frank Smith… the new Head of Matchroom Boxing.

At the tender age of fourteen, which is only a decade ago for the young man from Essex, Frank propelled himself onto Eddie Hearn’s radar at a family party when he up-sold him fifty quid’s worth of raffle tickets instead of the paltry twenty that Hearn had initially wanted to buy. Smith chastised his future boss with the classic sales pitch “don’t be a tight-arse, Eddie!” and history was made in the wink of an Essex-boy’s eye.

On Thursday afternoon at Cardiff’s City Hall, Frank hosted his first press conference sitting alongside Joe Cordina ahead of Joe’s first headline event. A new era, it seemed, was emerging.

And the magic of the moment wasn’t lost on Masher Dodd. The Merseyside man was full of compliments and charm for the Cordina fans, paying warm attention to his family and friends without a hint of menace. Team Cordina applauded him for his jovial spirit and, for a moment, the congregation forgot that this was the build up to a bruising battle of wills which will take place at Cardiff’s Ice Arena tonight.

The carnival atmosphere continued Friday with an outdoor weigh-in on the streets of Cardiff city centre, where the sun shone down on the fans, and the fighters threw their clothes to their trainers for safekeeping before parading into the scorching heat wearing nothing but their budgie smugglers and their factor 50.

If it seemed for a while that British boxing was on a trajectory to the stars with no seats for the local-level fighter, Matchroom have course-corrected that trajectory in true style.

With this current crop of fighters, fans and business professionals at the helm, British boxing is back at it’s best.

And when the British fight scene flourishes, history has showed us that the world will follow in its path. 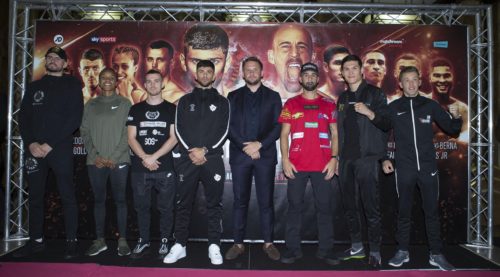