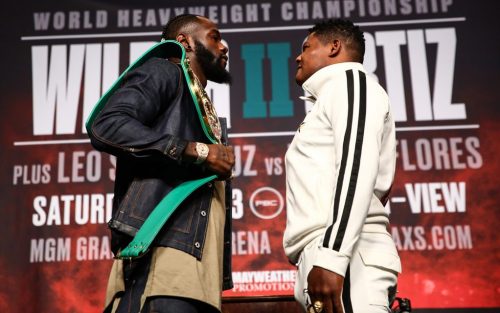 The champion of full weight of the World Boxing Council, Wilder returns to face the Cuban puncher Ortiz.

Tickets for the event, promoted by BombZquad Promotions, TGB Promotions and Mayweather Promotions, are now on sale and can be purchased at www.mgmgrand.com  or www.axs.com

This is what the fighters had to say Thursday from inside the MGM Grand Garden Arena in Las Vegas:

“I am the best in the world and I say it with confidence. Having said that, I have to give fans what they want to see. Those are exciting fights. The full weight division was in a dark place, but now it is on fire and I must keep it going.

“Luis Ortiz is one of the best in the world and one of the most dangerous men in boxing. No one in the top 10 has given it a chance. They say he’s old, but if that’s the truth, then one of them should fight him.

“When I look at the panorama of the full weight division, this man was not yet having a chance. It was an amazing fight the first time and I will make adjustments this time. That’s what it is all about. I will be my best version Saturday night.

“I’d rather go through difficulties in the ring than have a perfect career. What kind of legacy would you leave? I want to give you something to remember me. ”

“Luis Ortiz looks good, but I don’t think it will matter against someone like me. I am fit 365 days a year. I come to the camp in shape. The first day of camp, we were training. It is always good to see my opponents fit and properly prepared for a war. That’s all I can ask because they know what they face when they go against me.

“This is a great billboard with great champions and fighters around here. What more could you want? There is nothing more to say. Now is the time to act. I hope to give everyone the best of me. ”

“We train very hard to be prepared and go to war. You know what to expect. The hard part is waiting. This it is. I can’t wait for Saturday night. My opponent has to be perfect to last 12 rounds, I just have to be perfect for a second. ”

“I do not like lose. There were legitimate circumstances why I was not at my best in the first fight. It was a fatigue strike. I think if I had continued, I would have gotten the knockout. It was just fatigue, but I corrected it this time, so the best man will win. ”

“This will be the second world war between us. I’ve had 500 fights, including my amateur fights. In full weight, everyone has power. Sometimes it seems that a horse is kicking you. Wilder is very strong, but I will show what I know and what I can do.

“As I said before, and Deontay also said, this is not going to last 12 rounds. One of us will be knocked out. I wish there were no bells between rounds so we could continue.

“This is not just that Deontay fights with any other opponent. Obviously, Deontay had his reasons for taking this fight. But on Saturday, I’m going to show you why it was a mistake. I will be the new full-weight world champion.

“This is the Holy Grail, face the real world full weight champion. I want to be considered one of the best fighters in Cuba. I am very grateful to the coaches I had as a child who taught me the sport.

“I definitely want to thank Deontay, and all my team, for giving me this opportunity for a rematch. That’s what life is about. This will not be my last chance. I am here to fight and that is what you will see on Saturday night. ”

The champion in three divisions Leo “El Terremoto” Santa Cruz looks for a title in another division when he faces Miguel Flores.