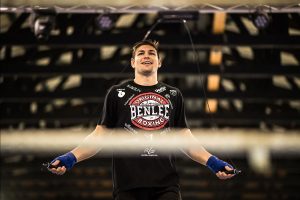 Vincent Feigenbutz (31-2, 28 KOs) hosted a press conference today in his home city of Karlsruhe ahead of flying out to Nashville, Tennessee, where he will challenge Caleb Plant (19-0, 11 KOs) for the IBF Super Middleweight World title at the Bridgestone Arena on February 15th.

Known as the ‘KO King’ due to his 85% knockout ratio, Feigenbutz has worked himself into a mandatory position with the IBF following a run of ten consecutive victories – nine of which came within the distance.

The 24-year-old German previously held the WBA World Super Middleweight title having stopped Mauricio Reynoso in the third round at the Gerry Weber Stadium in 2015. Feigenbutz successfully defended the title with a unanimous decision victory over Giovanni De Carolis, before losing a rematch the following year.

Feigenbutz, who hopes to follow in the footsteps of the legendary Max Schmeling by becoming only the second German boxer to win a World title in America, informed the gathered media that Caleb Plant can expect a tough night on February 15th.

“I am pleased that we are so close to the fight now,” said Feigenbutz. “I’m feeling fantastic and very well prepared. Caleb Plant is a tough opponent, but I’m not going to give him anything.

“I will give everything I have and fight until the last second! I want to thank my whole team and Team Sauerland for making this dream a reality for me!” 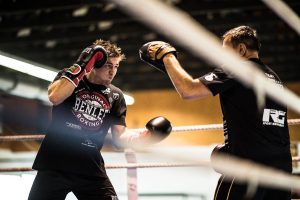 Dr. Martin Lenz, the mayor of Karlsruhe, was also in attendance at the press conference and expressed the city’s pride and support of Feigenbutz.

“It’s remarkable that with Regina Halmich, Sven Ottke and now Vincent Feigenbutz we produce such great boxers. The city of Karlsruhe will have our fingers crossed for Vince!”

“We are delighted to make this fight happen and reward Vince’s hard work with the opportunity of becoming a two-time World Champion,” said Sauerland. “This is a great opportunity for Vincent and also for German boxing – don’t miss Vincent make history on February 15th”.

The World title fight takes place at the 20,000-seater Bridgestone Arena and all the action will be broadcast live on Fox in the US and other territories to be released shortly.