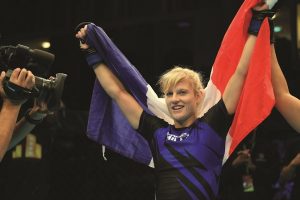 The International Mixed Martial Arts Federation (IMMAF) welcomes the announcement earlier today that the French Boxing Federation has been given the responsibility of supervising the first phase of development of the sport of MMA in France.

This decision, announced by the French Sport Ministry, is part of a historic legalisation of the sport of MMA in France. In a statement, the Ministry said: “Having requested and analysed all relevant information received from a number of combat federations who were interested in welcoming MMA, we have decided, by an official Ministerial Decision, to delegate the sport of MMA to the French Boxing Federation.”

It has been made clear that this will be a temporary arrangement and, after a year, the Ministry will decide whether MMA is ready to become an independent federation in France.

“We are delighted to see that Boxing will now be the partner of MMA in France, where it has extremely well established and respected structures. Above all, we believe that by partnering with boxing, MMA will show that it shares a willingness to create the right culture and values, especially in membership and education programmes for athletes, coaches and officials. “

“This is another significant milestone for the sport of amateur MMA. France is a major sporting nation and host of the Olympic Games in 2024, so partnering with boxing will be a massive boost in the growth of MMA in the country. This is a major step in the ongoing campaign by IMMAF for international recognition of MMA as a sport with Olympic values.”