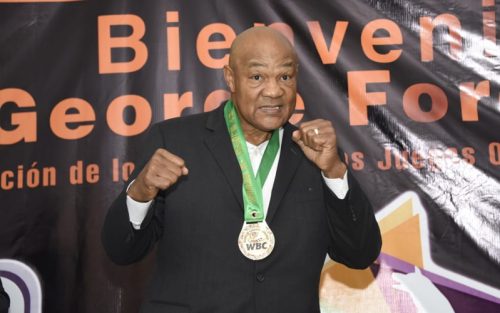 He made a direct call from the heart of one of the greatest of all time, the “Big” George Foreman, directly to the IOC to preserve amateur boxing at the Olympic Games, at an event held in Coyoacán, Mexico City at the fiftieth anniversary of his triumph for the gold medal at the 1968 Olympic Games.

In 1960, “The Greatest” Muhammad Ali, who was then known as Cassius Clay, won the gold medal in light heavyweight. Four years later, his always united and magnificently rival Joe Frazier won the gold in full weight. And four years later, George himself was crowned Olympic heavyweight champion. Amateur boxing, which is the fundamental basis of this sport, has been part of the Olympic Games since 1904, and George insists that it is the fundamental and essential component for professional glory.

George commented: “Without a doubt, the Olympic Games were my Salvation and my Grace. I hope that the IOC maintains amateur boxing at the Olympic Games for many years, we have been the most famous in boxing. The IOC I should think this twice!

“At the Olympic Village we were tremendously proud of having an identity, and that was the color of our flags, showing where we were from and what we really represent. This is a wonderful celebration of the fiftieth anniversary in Mexico, where boxing is so important. I love”.

“Winning the gold medal in the Olympic Games defined my life as an athlete, and all this time later, the fans are still cheering me on! Without that gold medal, George Foreman would never have existed, nor the presentation of the grill.”

“Boxing is great! You enter the ring, a guy hits you, you hear bells, you get dizzy, they knock you down, but you get up and keep fighting. ” It’s still the same sport. In the Olympic Games I felt very proud and I’m glad I won, we must win and we must keep winning!”

“Winning gold in 1968 was a dream come true for me as a teenager and as long as I live, I will never forget … Whenever I have big dreams, my heart always comes back to Mexico City and the Olympic Games. and our trainer Henry “Pappy” Gault told me: “Use that left jab, George. Jab, jab, jab! “He also gave me the confidence to train with Sonny Liston, he’s the only man who stood in front of me!” 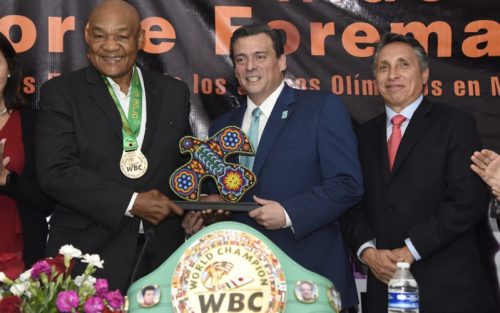 WBC further went on to say:

The Ex Hacienda de Cortés, located in the heart of the Coyoacán Delegation, was the setting for a meeting that was full of memories to celebrate the 50th anniversary of the 1968 Olympic Games in Mexico.

An emotional video took us 50 years ago, to that time where Mexico vibrated with the delivery and discipline of hundreds of athletes who were delivered on each track.

Horacio de la Vega, Director of the Sports Institute of Mexico City, was emphatic in saying that our country deserves to celebrate all the legends that rose to the podium at that time.

One of them and possibly the most iconic, the great former world champion and Olympic gold medalist in 68, George Foreman to whom he welcomed our country.

De la Vega commented that this celebration has been very important because throughout the year several sporting events have been done inviting the highest representatives of the participating disciplines. But nevertheless; the most important achievement has been to remodel each one of the 68 Olympic facilities.

Manuel Negrete, Mayor of Coyoacán, spoke not only to welcome all attendees, but also to remember that sport is the way to heal a wounded society, to rescue values ​​in children and young people always preponderating Respect, loyalty and teamwork.

He assured that one of the most important commitments at the head of this Delegation will be to continue promoting sports, activating facilities where children, youth and adults can exercise.

For Mauricio Sulaiman, president of the WBC, this day has a very special meaning, because it is necessary to take a few minutes to remember the glory of having been the venue for a sporting event as important as the Olympic Games.

The organization leader gave an emotional welcome to former world champion and gold medalist, George Foreman, a man who represents the best of boxing, a life of success and service that has been an example of improvement and delivery, but above all, love of God.

“Foreman is undoubtedly one of my dad’s spoiled champions, not just for the feats above the ring; but for its human quality.

He has been a great representative of the organization and what boxing is and today I want to give him a very special gift that has been kept for more than 20 years, a gift that my dad wanted to give him, the green belt and third generation gold. ”

George Foreman said, there could not be a better place to win that gold medal than in Mexico, a country that loves boxing and where it was wrapped with great affection.

Foreman also remembered Don José Sulaimán with great appreciation, he said he was the one who had faith in him and gave him the opportunity to play the world title against Joe Frazier, in a fight that he remembers as the most important of his career.