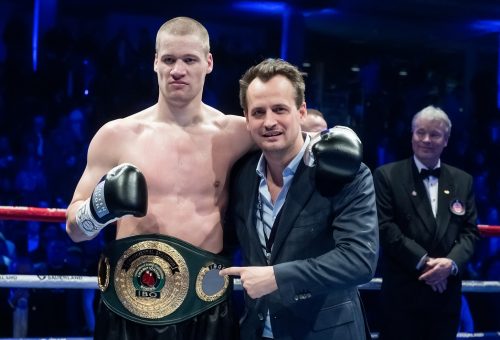 Norway’s number one male boxer is back in the ring headlining a huge show at the historic Ekeberghallen venue alongside Katharina Thanderz, who meets Danila Ramos for the interim WBC World Super Featherweight crown.

Havnaa was last in action on June 22nd scoring a third-round stoppage win over Levani Lukhutashvili at the Forum Horsens in Denmark. This performance followed a career best win for the 30-year-old, who defeated Rad Rashid in front of his home fans in Arendal on March 2nd to claim his first major title.

Havnaa, the son of Norway’s only ever male World Champion, Magne Havnaa, must now put his World title aspirations on the line against his most dangerous opponent to date in order to prove he is ready to face the best in the division.

Sands, born in Haiti but now based in America, boasts an impressive 72 per cent knockout ratio with 18 of his 20 victories coming inside the distance. The 32-year-old is a former NABA-USA and Minneosaota State Cruiserweight Champion, who has also challenged for the WBO Oriental title.

“It’s amazing to headline a big show in Oslo,” says Havnaa. “Last time I boxed in Oslo was at the Spectrum on the undercard of Cecilia Brækhus in front of 10,000 fans. I’m sure this will be even better with all my supporters and a top Norwegian undercard. I’m very excited.

“My opponent is a very experienced skilled fighter with a long reach and good fundamentals. He is a big puncher, who has fought some of the best fighters in the world, and I will be preparing for the best Al Sands there is.

“I’ve always had a big talent to train hard, but now I’m also starting to master how to train smart. I’ve started to become an experienced fighter. I know what to do, and I know what not to do, and all this is going to take me to next level.

“You never know how good an opponent is until you’re trading punches with them, but from what I can see, Sands is my most dangerous opponent. Boxing is a sport full of surprises and with top shape cruiserweights, anything can happen, but on November 16th, I plan to show why I belong at the top.”


Promoter Nisse Sauerland admits he has taken a risk allowing Havnaa to face Sands, but reveals the reward could be a shot at the IBO World Champion.

“This is potentially a very dangerous fight for Kai,” said Sauerland. “We’re taking a risk here but the reward can be great. This is a chance for Kai to prove he belongs at the top level. If he comes through this, then we could look to make a fight between him and the current IBO World Champion Kevin Lerena.”

All the action will be broadcast live on Viasat 4 in Norway. Christian Ramberg, Programme Manager Sports for NENT Group, says:  “World class boxing finally returns to the capital with an amazing fight card. Kai Robin Havnaa will prove that he is a title contender against a very dangerous American opponent. With two knock out experts in action the viewers should not blink.”

Tickets for ‘Capital Showdown’ on November 16th at the Ekeberghallen in Oslo are on sale now and available online via www.ticketmaster.no. 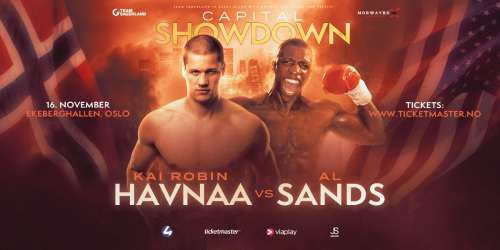