“I’m often asked by parents to work with a kid who isn’t performing well in a given sport. And it’s usually because the kid just isn’t interested! So instead of working with the kid, I work with the parent. And they usually end up realising they were pushing their own ambitions onto the kid.” 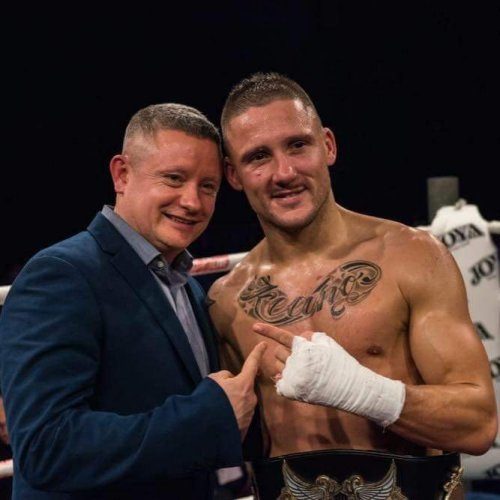 Even in today’s modern world of openly gay rugby players and openly depressed boxing champions, the idea of using hypnosis to help focus the mind is considered, by many a macho man, to be a sign of weakness.

Yet almost every study and every recipient tells the same story – of a massive improvement in sports performance as a direct result of mind strengthening techniques.

So why the negativity?

“Not a problem at all my friend, absolutely no worries. How are you this morning mate?”

Vinny Shoreman’s enthusiastic and understanding response to my apology, after I disturbed his Sunday morning for a last minute telephone interview, speaks volumes about his character.

Like many of his fellow Mancs, Vinny embodies the happy-go-lucky nature of the North. But he takes it a step further than most, making sure that his interviewer is fully at ease before we begin our chat. A talent, or perhaps a tactic, that he’s developed over the many years he’s spent coaching fighters and civilians in the art of mind manipulation.

No. Manipulation is the wrong word, since it suggests it’s him doing the manipulating. It’s not. As Vinny once told Joe Rogan (and his seventeen million listeners) after hypnotising Joe before appearing on his podcast:

“It’s all self hypnotism really. I just guide you in.”

Shoreman – who also commentates for kickboxing powerhouse, Enfusion – started his fighting career in the tough gyms of Manchester, but admits that it wasn’t really for him:

“I only had a few fights. I was too analytical for fighting. I kept getting annoyed with my performance.”

So did that make him more suited to training fighters than actually being one?

“Perhaps yeah. I was training lads on and off from the age of seventeen because I was the senior arm band in the gym.”

And it was during those early days, where Vinny spent his time helping fighters to perfect their spinning elbows and switch-kicks, that he discovered a factor that no one else was discussing on the fight scene – the mental factor.

Having watched tough men crumble under the pressure of a fight night, or technical artists stumble around the ring like they had two left feet, Vinny realised that it was not usually their training or their talent that was letting them down, but their minds.

After twenty years in the Muay Thai world – as first a fighter, then a trainer – Vinny discovered mind coaching after attending a seminar in 2007. It grabbed him from the very start and he decided there and then that any other career would be wasted, this was him. His calling. His future.

And thus began the journey of a man with a plan. A plan to help people. A plan put into practice when eight time world kickboxing champion, Liam Harrison, employed Vinny as his long-term mind-coach. And again, perhaps more pointedly, when Joe Schilling utilised Vinny’s services before rematching three opponents that had previously beaten him – and smashed all three in revenge. 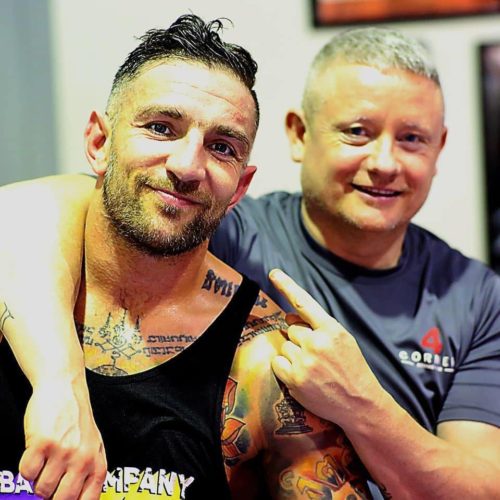 So, are Liam and Joe the poster boys for mind coaching? I asked Vinny, naiively.

“No. Absolutely not” came his straightforward reply. The no-nonsense language of the North beginning to show through the polite banter, reminding me that Shoreman is a man who deserves to be taken seriously, despite his placid demeanour.

“Because mind coaching is about so much more than just sports”, he continued.

“People use my service to beat anxiety, stress, all sorts. So everyday’s a win for me.”

I decided to get straight to the point. Northern style:

So… what kind of success rate do you get, please Vinny?

“All of them. If they come to me, they’re already in the right mind set. The fighters who use it perform well. They can’t all be champions but at least they feel better about being in the fight.”

And have you ever turned a fighter away?

“Yeah, loads actually, some lads just don’t have it. They think they do because the culture around young men is all about being tough & having big muscles to earn respect. Them kids on the playground or the council estate don’t tend to look up to scientists, do they? There’s a macho aspect to fight sports. Everyone thinks they can do it but some simply shouldn’t. If everyone was a champion it wouldn’t mean anything.”

So what are the fighters actually gaining from your sessions?

“99.9% of issues are about confidence. People always talk about what they don’t want – mind coaching is about getting them to focus on what they DO want.”

Are you ever approached by people who don’t know exactly what they want? Just that something isn’t right?

“Yeah, I’m often asked by parents to work with a kid who isn’t performing well in a given sport. And it’s usually because the kid just isn’t interested! So instead of working with the kid, I work with the parent. And they usually end up realising they were pushing their own ambitions onto the kid.”

I take a deep, brave breath before plunging into the next question, the one I’ve been building towards throughout our conversation:

Skeptics would argue there’s no value to mind coaching… what do you say to them?

Vinny stops abruptly, leaving that statement hanging. I can tell he means it. And that he’s been asked it a million times.

“To be honest, if someone feels that they don’t need it, they probably don’t. But at the end of the day Cus D’amato used a mind coach for Mike Tyson. And after beating Gerald McLellan, Nigel Benn gave his first thanks to (TV hypnotist) Paul McKenna. Lomachenko uses a mind coach and even uses things like juggling to focus his mind. It takes more than just banging or making noise.”

I press him on this “noise” comment. Even up against the likes of Tyson Fury in boxing and Conor McGregor in MMA, Vinny’s preferred sport of kickboxing has managed to escape the need for endless vocals. Often resulting in better match-ups. Although, perhaps, at the detriment to ticket sales.

Do you think maybe there’s too much shouting going on in fight sports these days?

“Absolutely. After Joe Rogan’s show in LA, I visited Freddie Roach in the Wildcard gym. Him and his fighters don’t do all that shouting. Freddie is at the top but he’s completely chilled out and humble, no shouting or performing…”

And with that, Vinny Shoreman hits Northern level ten.

It’s hard to disagree. Vinny, without meaning to, has just proven his own point. Never once has he shouted about the benefits of mind coaching. He just knows. He’s resolute in his belief and confident in his results. And that doesn’t require shouting.

He laughs, returning the conversation to it’s naturalistic laid back state. And his mind turns to the fighters that he watched spar in the Wildcard’s inner sanctum, the secret basement open only to Roach’s closest confidantes.

We while away the next half an hour talking about the state of world boxing. And yes. He appears to know more than the boxing journalist that he’s speaking to. (I blame mind control.) Then, sadly, Vinny has to tackle Sunday duties.

As I hang up the phone, having grinned through a thousand goodbyes, I feel like I’ve just made a new best friend. Or perhaps like I’ve just handed over my bank details.

Either way, I’m left with a buzz of confidence that simply wasn’t there before. A conversation with Vinny Shoreman is like drinking a whole pot of coffee. In the sun.

I beam through my day and it’s evening before I realise that I am the latest beneficiary of Vinny’s natural talents. Was this intended, or accidental? I’ll never know. But this much I know for sure…

And if you’re still doubting the benefits of mind coaching, well, he doesn’t care.  The facts are all right there and there’s no need to shout.

Because the verdict is in and the result is conclusive…

If mind coaching works on Northerners, trust me, it’ll work on anyone.