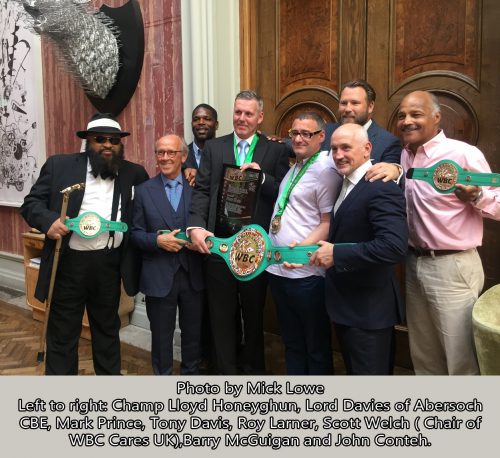 Lord Davies of Abersoch  the Chair of the Royal Academy of Arts hosted a magnificent event in London to honor two heroes who confronted terrorists, joined by some  great Brits, who won World Boxing Council crowns and have since proved themselves to be champions outside the ring with sterling charity work.

The reason and underlying theme, was to recognize the astounding, astonishing  and outstanding bravery of Roy Larner the lion of Lion Bridge who saved women and children lives by confronting jihadi terrorists who were armed with knives. Unarmed, fortified by sheer courage, he fought them off and defended the door of the restaurant until the Police arrived.  In the process of this most extraordinary, selfless and conspicuous heroism,   he suffered  horrific wounds and injuries. The World Boxing Council immediately established a  fund, donating  $5000 dollars  to help him.

Also,  the Good Samaritan of Parliament Square GB boxing trainer Tony Davis who ran into danger to be the first responder to help fallen hero Police officer  Keith  Palmer  who sadly later died of his injuries. I spoke on behalf of President Mauricio Sulaiman. While Lord Davies and Scott Welch also gave speeches. While Barry McGuigan and Lord Davies presented  the awards.  A dinner was held for the two heroes and their partners at the Academy and they’ve been award life membership.

We gave awards to all the Champs also including Mark Prince, who’s  son was a under 16 footballer for Queens Park Rangers and was at a bus stop and witnessed a girl being attacked. He instantly went to her aid and was stabbed to death.  Ever since then Mark Prince goes out every night on to the streets into gangs around London and speaks to them taking other boxers.  In the spirit of friendship they spar in gyms and he convinces them to stop using knives.  He does absolutely amazing life saving work and now WBC Cares UK will be working with him fully supporting his efforts.

We recognised Champ John Conteh for all his community work and celebrated him receiving  his MBE from the Queen. We awarded Champs Barry McGuigan and Scott Welch for their wonderful work with Amateurs over the years and Lloyd Honeyghun for his community work. 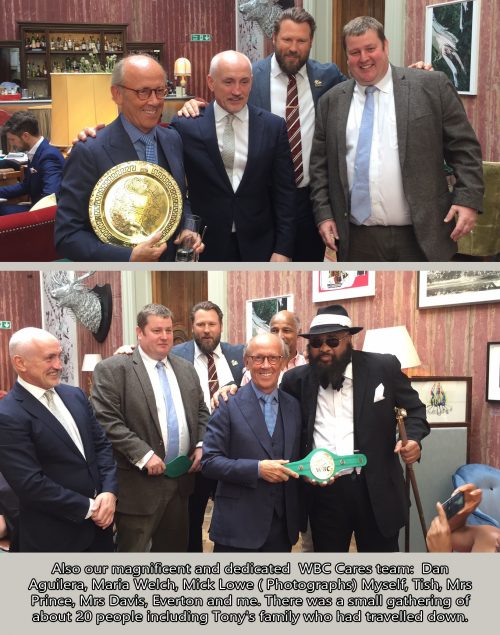