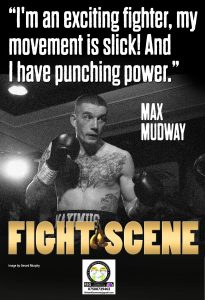 “Boxing has helped me in so many ways personally and socially; it’s taught me the importance of discipline, how to conduct myself properly in all aspects of life, and to respect people. Without it, my life could’ve easily followed another path. I got heavily involved in the festival scene when I grew up and it really started to affect my training, and that lasted for a few years”.

Over a decade ago, Jon Pitman; owner of Fight Factory Gym, walked into Stroud’s Maidenhill School to run extra-curricular activities with pupils.

Here the Gloucestershire trainer would teach the arts of unarmed combat to a group of eager students; showing them the ropes of the sport, encouraging an active lifestyle, and preaching the value of self-discipline.

What Pitman didn’t expect is to find one of his most prolific proteges on his visit, in the form of baby-faced, 13-year-old Max Mudway (4-0).

Fast forward through an 11-year partnership which saw the Stonehouse kid develop his craft through a high-level amateur campaign, Mudway and Pitman are set to make a case for domestic kingship after dispatching all three foes at professional level in convincing fashion.

“My trainer (Pitman) first met me at my school when I was 13-years-old. After I took part in a few of his classes he asked if I would come and train at his gym in Gloucester, and 11-years later I’m still there” said Mudway. 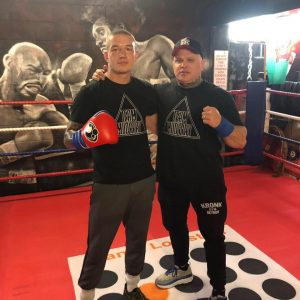 After scouting the youngster at a tender age, Pitman wasted no time in honing the skills of the future prospect and quickly entered Mudway into prestigious amateur tournaments, whereby the pair won their first silverware in the Reditch Box Cup, when teenage Mudway beat a man 12-years his elder.

“When I fought for the Reditch Box Cup, I was just a 17-year-old boy against a 29-year-old brute of a man and I still managed to win the gold medal. I fought 27 times as an amateur and won 23 of them, all at a good level whilst I was still learning”.

In a short space of time, the partnership was beginning to yield exponential success, and the young schoolboy would quickly grow into a man under the tutelage of his original creator. From the first time lacing a pair of gloves at 13-years-old to winning a domestic tournament just 4 years later, Pitman had orchestrated a fighter with serious technical and physical ability who was quickly emerging as one of the most respected prospects in the region. Throughout this transition however, the first temptations of adult-life would begin to hinder the journey of the bright prospect.

“Boxing has helped me in so many ways personally and socially; it’s taught me the importance of discipline, how to conduct myself properly in all aspects of life, and to respect people. Without it, my life could’ve easily followed another path. I got heavily involved in the festival scene when I grew up and it really started to affect my training, and that lasted for a few years”.

It was in these years that the talented Super-Welterweight would begin to drift in and out of the gym, exercising other interests and consequently neglecting the discipline that had brought him so much success. Often a dangerous pattern in most fighters, where the fire begins to dwindle and distractions begin to jeopardize development, the once prosperous youngster was in danger of wasting an array of skills that he had worked so hard to prefect.  It was a period in which Mudway would experience all of life’s offerings, both good and bad, until the realization of his true purpose a few years later.

“It wasn’t until I turned 23-years-old that I finally realised it was now or never and I either use the potential so many people knew I had or just let it waste away. Now, I’ve become a professional boxer and I’m a highly respectable prospect who is capable of achieving big things in my future”.

Now on the straight and narrow, Mudway plans on wasting no more time. He vows from this point on, it’s ‘no boxing, no life’. Equipped with a strong amateur pedigree, credible power in both hands, silky skills and a new-found purpose, the 13-year-old protégé from Stonehouse has correlated over a decade of sacrifice to earn his right to challenge for the domestic jewels.

“Training has been amazing. I’ve been getting top quality sparring in with lads from St. Joes in Wales and with Owen Cooper in Worcester, usually sparring twice a week without fail. Most days I’m training twice a day, with pad-work, roadwork and sparring, whilst also running PT sessions at my gym to help out with some money along the way, which usually starts at 6am most mornings. If I’ve got sparring scheduled early doors, I’m up now at 4am for a 3-6 mile run before, and to walk my dog of course. There’s not really a good 20 minute gap to sit-down now, I’m always in the gym”.

Crediting his early fondness for the “pure aggression” of fighters such as Mike Tyson and Nigel Benn, the student of the sport now finds value in the education of the sport’s elite tacticians; the Lomachenkos and the Spence Jrs, culminating Mudway’s belief that he truly can “do it all”.

“I believe I have all of the skills and attributes needed to go all the way in this sport. I don’t plan on losing ever, I want to go as far as I possibly can”.

Now 4-0 as a professional, the 23-year-old is looking to harness over a decade of development and challenge the kingpins of the Super-Welterweight division. Alongside his original trainer, Mudway and Pitman are eager to add more silverware to their cabinet and realize the true potential of their pairing in the sport. 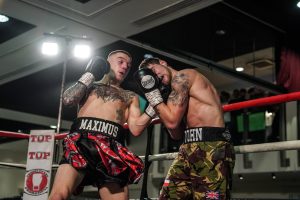 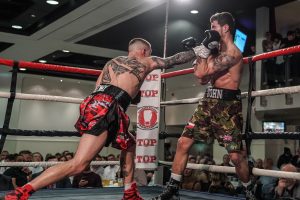 “In the near future, I want to win the Southern Area title. From there, I want to secure the British title and look to fight for world titles after then. My opponents better be prepared for what I’ve got because they’ve never fought anyone like me, my movement is slick and I have serious punching power”.

Despite his talent, there is no escaping the fact that Mudway could end up a victim of his past, having suffered lapses of concentration throughout the years, resulting in the disillusion of his true potential as a prizefighter. Mudway, who has since cleaned up his act and done so on his own accord, vows there is nothing else he wants now, than titles.

“Motivation is easy for me now because I love what I do. As soon as I flipped that switch in my head and decided to turn professional, I knew that it was what I was supposed to be doing all my life. Sure, when I’m resting, I’m mixing my own tracks and listening to some Drum n’ Bass, but boxing is what I love”.

From kid-dynamite, to wasted potential, to reinvigorated soldier, Max Mudway now looks across the division in search of titles, and claims there won’t be a foe strong enough to upset his plans of stardom.

Max would like to thank his army of loyal fans, follewers, supporters and sponsors for the continued support: