McGoldrick: I can be Wales’ next star

Commonwealth gold medal man itching to be a hit at home

Sean McGoldrick says he can become a big star in Wales as he prepares for his second pro outing at the SSE Arena Belfast on Saturday night, live on Sky Sports.

The 25 year old made his pro debut in Manchester in March against the vastly experienced Brett Fidoe and impressed over the four round distance, and now wants to put everything he learnt that night into action in Belfast as he looks to build to a fight at home in the new season.

“I’ve been training hard since my first fight, making minor adjustments from what I’ve picked up since my debut so I’m looking forward to getting back in there and showing what I’ve learnt,” said McGoldrick.

“My debut was a bit of a blur to be honest, it was over so quick but looking back I was happy with my performance. With it being my debut, I was so excited and maybe a bit too eager. Maybe I could have made a few changes, but overall, I was happy with how it went.” 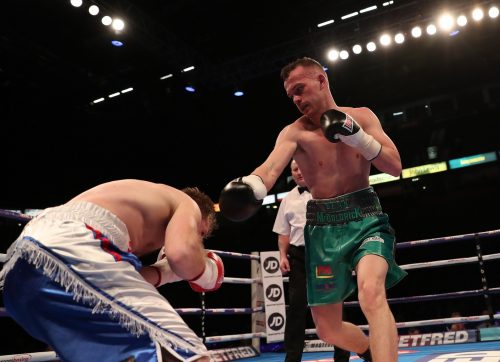 McGoldrick claimed gold for his country at the 2010 Commonwealth Games in Delhi and as the boxing season draws to a close, the Newport talent is eyeing a homecoming in the next season with hopes that he can bring a bill to his home nation along with stablemate and Team GB Rio Olympian Joe Cordina.

“When I boxed in Wales as an amateur it was amazing, but to do it as a professional on a bigger stage would be a dream come true,” said McGoldrick. “I’ve heard about a potential show in Cardiff for the new season so the motivation is for me to perform in Belfast first and foremost then I can hint to Eddie I want to be on that show.

“Welsh boxing has got a very rich history but it sort of died off for a couple of years but now it feels like it’s on the way to being massive again. The gyms are buzzing. Boxing is becoming one of our main sports again and it’s good to be a part of it moving forward, I really feel I can be a big star there.”

McGoldrick also has the inside track on Saturday night’s main event having worked with the IBF Bantamweight champion Lee Haskins in the build-up, and predicts a tight encounter with unbeaten hometown talent Ryan Burnett.

“I did some sparring with Lee and he’s looking good,” said McGoldrick. “It was good for my confidence, coming away knowing I’ve shared the ring with a World Champion in my weight category.

“If Haskins can frustrate Burnett, I think Ryan might play into his hands. But with Ryan so fresh and young and you can see how much he wants it – that will also be a big part. I wouldn’t be surprised if we see a draw! It’s a genuine 50/50 fight. I can see how they can both win.”

McGoldrick is part of a huge night of action in Belfast topped by Haskins’ defence against Burnett.