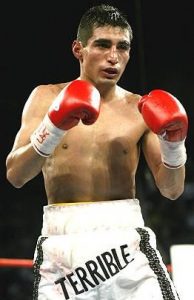 Here’s our selection of the top Mexican featherweights of all time.

VICENTE SALDIVAR Wicked-punching southpaw Saldivar was the nemesis of Wales’ Howard Winstone, the man that the Merthyr great could never overcome. Saldivar dethroned Cuban-Mexican Sugar Ramos to claim the crown, and his stunning reign included three victories over Winstone and two wins over Mitsunori Seki. After taking 21 months out he returned to rule the division a second time, sealing his place in the Hall of Fame.

SALVADOR SANCHEZ It’s been suggested that if ‘the Invincible Eagle’ hadn’t died prematurely at the age of 23 he could have gone on to be the greatest featherweight of them all. His two year reign saw him inflict the first defeat on Wilfredo Gomez and stop future champion Azumah Nelson in the 15th round of an all-out war. The Nelson bout would be the champion’s last as he died in a car crash just two weeks later.

RUBEN OLIVARES Renowned as one the greatest bantamweights of all time, Olivares was feared for his punching power and formidable left hook as he moved his way through the divisions. At

Marquez had won seven world titles in four different weight divisions, the first of which was at featherweight. There’s very little missing from Marquez’s CV, but highlights would include his epic four fights with Manny Pacquiao and claiming the super-featherweight crown from fellow Mexican Marco Antonio Barrera.

Just like Marquez, ‘El Terrible’ has won world titles in four different divisions, moving up to featherweight having ruled at superbantamweight. The Tijuana man had defeated Barrera at the lighter weight, but when they clashed at featherweight Morales tasted defeat for the first time in 42 bouts. He bounced back to regain the crown, though, before moving on up the divisions.

MARCO ANTONIO BARRERA The ‘Baby-Faced Assassin’ started his long professional career at superflyweight at the age of 15 and won his first world title at superbantamweight five years later. He stepped up to featherweight to meet the challenge of Naseem Hamed; despite going in as the underdog, Barrera gave ‘the Prince’ a boxing lesson as he handed him his first loss. The Mexico City man tasted defeat in super-fights against Erik Morales and Pacquiao, before moving up to find future glory.

One of the great Mexican Champion Julio César Chávez’s claim to fame was a defeat against Greg Haugen in front of 132,274 people.

The “Azteca” Stadium in Mexico City was the setting for the all-time attendance record for a boxing match. The main combat between Julio César Chávez, from Mexico, and the American Greg Haugen, was witnessed by more than 130 thousand spectators, according to official reports.

Chavez was a multiple-time world champion in three weight divisions, including Super Featherweight. 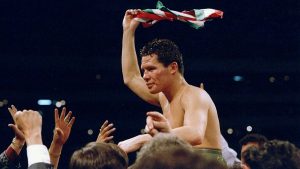