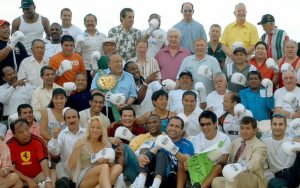 The President of the World Boxing Council at that time, Don José Sulaimán, had been very active helping the victims of Hurricane Wilma. A couple of months before this historic event, he’d sent two trucks with containers of  food and water to Cancun plus blankets to support of the victims.

“The Night of Champions sent a clear and decisive message around the world that Cancun was standing and steadily recovering. Although it received and suffered  a grievous blow, Cancun retained the tenacity and willpower to get up from the canvas to continue in the fight,”  Don José so aptly said.