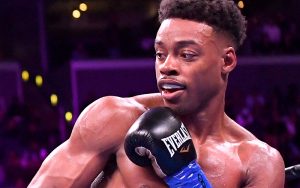 Errol Spence Jr. from  the heart of Texas, has built an 8-year unblemished professional career, and during all this time, alongside his great coach Derrick James, he has achieved 26 victories, 21 of them via KO.

As a Green and Gold Champion, Errol is willing, eager and committed  to stake his title Laurels against the best. He comes from facing and defeating former champions Shawn Porter and Mikey García. In 2017, he even traveled to the United Kingdom to face Kell Brook and win the welterweight title.

Only days after facing Shawn Porter, Errol crashed.  He had a severe car accident that could have easily cost him his life. Humbled by this brush with fate, Errol recognised sweeping attitude changes were needed. This had been a clear wake-up call.

“I think it was a call from God telling me to focus on what was happening. I feel like I wasn’t concentrating like now. So I’m just as focused today as when I was going to fight Kell Brook. I feel like I’m doing my best because I want to prove that people are wrong.”

Hungrier than ever, with no test or warm up fight after his recovery, Errol is more than ready to prove that he’s indeed the rival to beat in a division that gleams with a glossary of big names.

Errol, who returns to the ring after the accident he suffered last year, is pleased to put his gloves back on, and to be on such an important stage again, in front of his fans in a fight as significant as this one  against Danny, a fighter who he knows will be a worthy and  demanding challenger.

“No one made me fight Danny Garcia. I wanted someone dangerous. Fighting someone with a great name takes me to another level.”

Fully recovered from that incident, Errol acknowledged that he had difficult months, but thanks to the support of his family, his team, his coach, this enthused him with the strength to move forward and persevere. For Errol, returning to the ring and being able to defend his WBC belt in such a way, is the moment he dreamed of since his rehabilitation began, so he always remained focused and with a clear mindset. 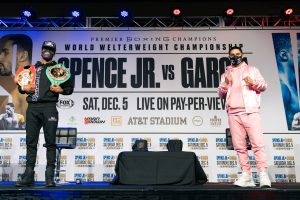 “I think it renewed my focus on the things that got me to the top of the mountain.”

Committed to all those who trust him, Errol stressed  that this return will be more than spectacular, because it is something, he owes to himself, to his family, to his work team and to his fans. Supreme motivation to meet the coming challenge.

For Danny, who has waited patiently for this opportunity, the fight represents the opportunity to finally prove who is the best in the division in a match where he is deterred to show that he is a champion. Without minimizing his rival, Danny was serene and confident that he will come out with victory, because he has trained and worked flat out for this, day in, day out  during the recent months.

With these statements, which will be reinforced by exploits, we are confident that this fight will be one of guaranteed quality, as both come with the desire to provide peak performance, because with the whole issue of the pandemic, it is important for them to give the public a show of the highest level.

Boxing fans are milling, thrilling  to close out this year’s activities with a fight of this exceptional  caliber, starring two outstanding talents.

Errol Spence Jr. vs. Danny Garcia will definitely and definitively be a superb fight to remember