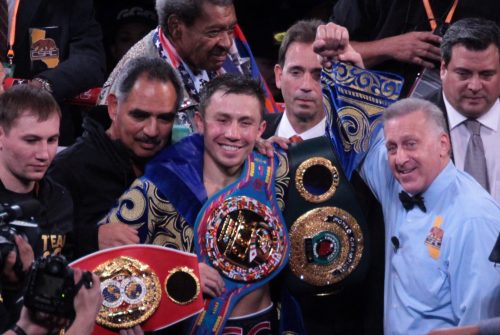 Golovkin had previously stuttered, not being able to knock out his last two rivals, Daniel Jacobs and Saul “Canelo” Alvarez, but this was a markedly different story.  A vain hope for brave Vanes, who’d taken the fight on just two and a half weeks notice, and not fought for two years.   Nightmare by nickname, his aim of providing a mighty shock, to rival Buster Douglas’ KO of Mike Tyson in the Tokyo Dome, proved to be an elusive spark of a daydream.

Don King, who promoted Tyson back then, and was now in the same role with Vanes, had predicted an upset for this one, ignoring his own famous saying accessing underdog chances, which goes: “His chances are slim and none…and Slim’s out of town.”

Vanes who pledged to stand his ground and bring the fight to Gennady, did just that in round one, tagging the champion with some hard punches.  He caught Gennady with well aimed combinations.  Yet the warning signs were already there, to see and to saw, as Vanes was taken out of his stride, by a very hard left hook to the side of the head.  Undaunted he impudently landed a straight right and a left hook to an impassive but annoyed Gennady’s face just before the bell to end the first. 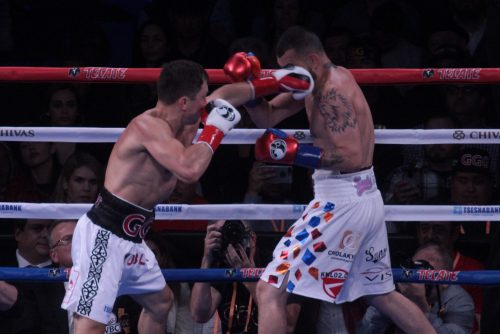 Yet this smattering was never going to be enough to avoid the battering.  Gennady, who’d absorbed a quiet but stinging word of admonishment from Trainer Abel Sanchez in the interim, and full well knowing that his opponent, who’d moved up from super welterweight, would buckle under bombardment from heavy guns, decided to fire on all cylinders!

A massive right uppercut landed right on the button, followed by a blistering overhead right, a couple of straight measuring left jabs, another huge right and a shuddering left hook, pitching Vanes face forward on the canvass. Somehow he got to his knees, but slumped forward, and counting Referee Jack Reiss, waved his arms wide to halt it at one minute and fifty three seconds. 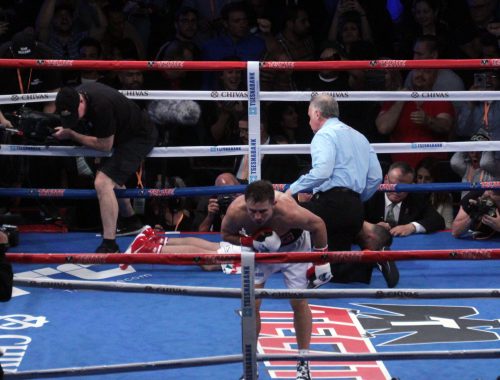 Vanes was soon up and about, ruefully saying this is what it must be like to hit by a train. Gennady who took his bow to an impressed crowd, improved his record to 38-0-1, with 34 knockouts, while “The Nightmare” Martirosyan saw his record fall in 36-4-1, 21 knockouts. It was the first time he’d be KO’d.

The fight in which Gennady broke sweat, but wasn’t tested, was organized by 360 and K2 Promotions. It was televised by HBO in the United States, and Combat Space in Latin America.