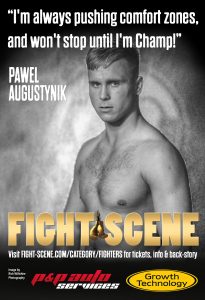 “At 13 years old I was getting into trouble at school and I ended up in a few fights, so my parents took me to Taunton ABC under head coach Dennis Cornall. Within 3 years I was English ABA JUNIOR champion and I went on to represent England in the GB championships winning the gold and the Boxing News Boxer of the tournament.”

24-year-old Pawel Augustynik’s professional record currently stands at 11-0, making him undefeated in the light heavyweight division. The fighter from Somerset has demolished adversaries in remarkable fashion, showcasing his ability to become a real contender within the division. 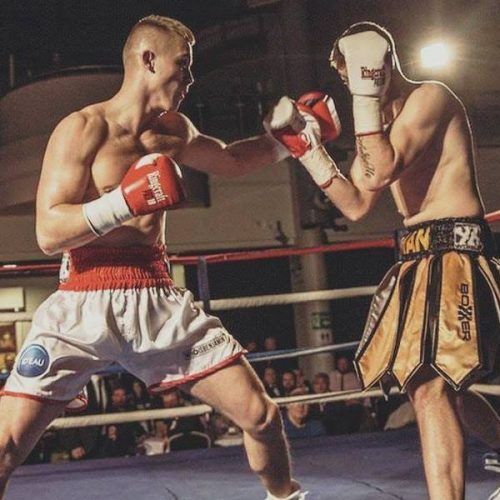 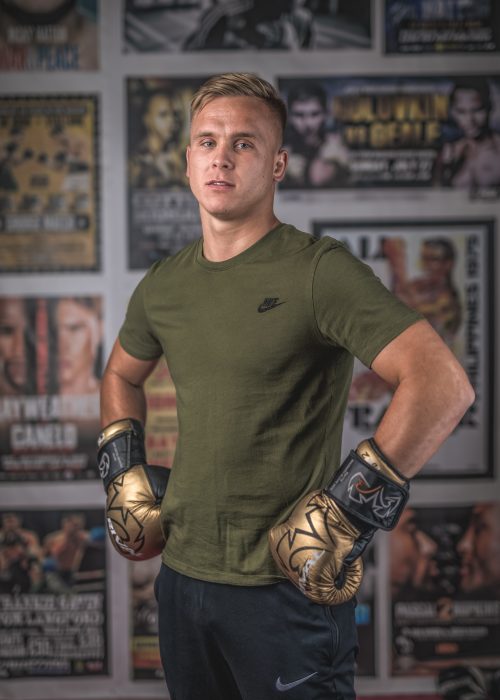 As a fighter, Pawel is perhaps best described in his coach Dave Entwistle’s words:

“Pawel excites me, early in his career he relied on his raw strength and aggression to win fights, but now nine fights in, his boxing is starting to come together and he has been able to improve technically while maintaining that natural strength.”

“Now he’s an exciting fast puncher, compact with strength and a natural aggression, but still knows how to pick his punches”.

Like many boxers, August was introduced to boxing at an early age in order to keep him out of trouble during his school years.

“At 13 years old I was getting into trouble at school and I ended up in a few fights, so my parents took me to Taunton ABC under head coach Dennis Cornall. Within 3 years I was English ABA JUNIOR champion and I went on to represent England in the GB championships winning the gold and the Boxing News Boxer of the tournament.”

After such an explosive start at a young age, Pawel progressed into the amateur boxing scene and from there things started to fall into place.

“Back then I beat a lot of experienced international lads who had far more experience than me, but I was tough and wanted it more. Pretty soon after I boxed on an amateur show which Chris Sanigar was attending. After the fight he invited myself and my coach David Entwistle to his gym and we got on well, so when the time came it was only natural to turn over with Chris who has a good history of producing professional champions.”

The current light heavyweight division boasts an enticing line-up as we head into the latter stages of the year and a lot of that promise comes from the UK with Anthony Yarde and 2016 Olympic bronze medallist Josh Buatsi stealing the headlines time and time again. These are two fighters that Pawel holds in high regard.

“I have a lot of respect for both Yarde and Buatsi, they are an important part of a division that is currently very strong and holds a lot of talent. I like Yarde’s agility and his ability to combine speed and power to become explosive and I think Buatsi has a great skillset and has a lot of experience from his time as an amateur which gives him a great pedigree.”

As well as these two current light heavyweight artists, Augustynik is heavily inspired by one of the pound for pound greatest fighters in boxing history.

“My idol growing up was Roy Jones junior. Everything about him was so exciting and natural. His evasive skills were out of this world. I would try and box like him, but it didn’t work as I got hit too much. Now I like GGG it’s the way he sets them up, he’s a real thinker and he wears his opponents down and then stops them. I like to think that I have some of those qualities in me.”

Ahead of his eleventh professional fight, Pawel is still at an early stage in his boxing career and recognises that there is a lot of legwork to put in to achieve his ambitions.

“Right now, I’m training twice a day Monday to Friday, with one session early Saturday morning, followed by a sports massage in the afternoon, allowing plenty of time for recovery over the weekend. I train in my hometown Taunton to work on my conditioning and then I’ll travel 50 miles to Bristol to practice the boxing side of things.”

August, like most fighters, dreams of becoming a champion, but he’s aware of how the professional boxing scene works and the ladder that he must climb in order to reach that status. 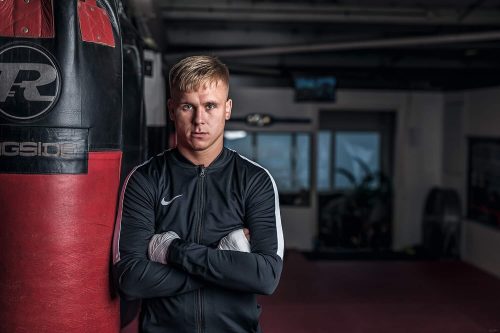 “I have massive ambitions and I want to go as far as I can in the sport, but it’s one step at a time. I’m still very young for a light heavyweight so I would say in 5 years I want to be British champion and I’d also be at the right age to be potentially moving onto even bigger things.”

“In the short term,  I’m hoping to go for a Southern area title.”

As Pawel progresses through the ranks, his following starts to grow, and this is something that every boxer needs to survive in today’s fight scene. Augustynik recognises the support and is eager to put on a show for those that pay to watch, until the very last bell.

“I would want my fans to know that they mean the world to me and essentially they keep my career going. It’s difficult to work your way up as a pro on small hall shows. If you don’t sell the tickets, you don’t box.

“As an amateur I wasn’t a show off who had lots of people coming to watch me box, it was only my family, so I’m grateful for the growing support that I have, and I love each and every one of them. One day I will be a champion for them.”

Read More on A Passionate Ethic For All Things Boxing HERE

Pawel would like to thank is army of followers, supports and sponsors for their continued support: