The Birth of British Warriors Boxing

With UK boxing on a trajectory to take over the world, Fight Scene went beyond the glitz & glamour to visit the frontline of British boxing, talking to the matchmaker currently paving the way for the next generation…

“I’m just a massive boxing fan. I absolutely love it…”

Mo Prior, the Londoner at the helm of British Warriors Boxing (alongside partner Greg Steene), was in jovial spirits when Fight Scene caught up with him – even though he was rushing between meetings at the BBBC and his own Euston offices.

“That’s why I got into it really. I was a footballer myself, but I always loved the boxing.”

Somehow, putting “the” in front of “boxing” legitimises Mo’s claim to be a fan. Yes, he was a semi-professional footballer (and a fully professional businessman) before becoming a boxing promoter but The Boxing is something he owns, understands, cherishes. A complete thing. A part of his character. 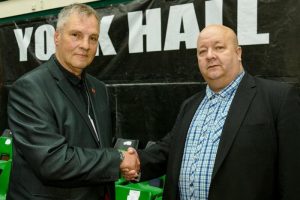 Fight Scene pushed Mo for a little more about himself.  But, considering he’s one of the UK’s fastest growing promotional prospects, Mo is a man who doesn’t like to blow his own horn. He’s a promoter (and manager) who believes that his shows speak for themselves and that it’s his fighters who deserve the limelight, not him.

“I mean, no one wants to hear me banging on about me, do they!”

Actually Mo, yes. Fight Scene want to hear about you. And so do the millions of fight fans across the country who are looking for something a little different to the recent emergence of stadium extravaganzas, which some feel are taking the punch out of grass roots boxing.

Although Mo Prior is a modest man, what he does say, he says with purpose – and with a chuckle that bounces through the phone line.

And having recently cast his net from his London base (where he treats York Hall as a second home) into the South Wales Valleys to gather up fresh talent, Prior has reason to be pleased: he’s just signed a host of Welsh fighters in his quest to put local level boxing back on the national map.

When Mo & Greg formed British Warriors Boxing Promotions in 2011, UK boxing had just hit something of a low point, after a host of British fighters failed at the top level…  Carl Froch was outclassed by Andre Ward, Matthew Macklin was unlucky against Felix Sturm, David Haye was at his worst against Wladimir Klitschko and Amir Khan had battled to a controversial defeat at the hands of drug cheat Lamont Peterson. Darren Barker, Martin Murray & John Murray also lost out on titles.

And as if it wasn’t bad enough that our homegrown heroes were struggling on the world stage, it seemed that the domestic dust ups weren’t happening either – it would be another two years before Froch & Groves lit up the Manchester Arena. 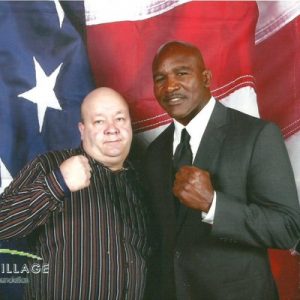 As a true fan – and a highly successful businessman to boot – Mo Prior had a dream not to use the UK boxing scene as his own personal cash cow (a tactic seen all too often by preceding promoters), but to bring back the passion of the provincial punch-up. To deliver explosive fights to the true fans, right on their door steps.

Having first stepped into boxing by helping to steer Finchley Boxing Club to success as a member of its committee, Prior did his bit for the national fight scene when the club took on a young heavyweight prospect and guided him from ex-offender to Olympic gold medallist. His name – Anthony Joshua.

And although it was Matchroom that signed the future star of world heavyweight boxing when he turned pro, it was Mo Prior who saw the potential in other up and coming fighters, those perhaps marginalised at the expense of the Joshua juggernaut.

“It seemed like there were a lot of fighters out there who weren’t getting the exposure they deserved. And the big names were getting the big fights but they weren’t always good fights. It didn’t seem fair on the fighters or the fans”, Mo told Fight Scene.

It’s hard to disagree with Mo’s assessment considering that Eddie Hearn went on to bring the Matchroom machine to the Welsh capital twice – and twice failed to fill the undercard with Welsh fighters.

“With British Warriors, (now Priority Boxing Promotions) we just wanted to match the best against the best”, Mo continued.

And so was born British Warriors Boxing, the promotions company now in its seventh year, that has stretched its wings from London to South Wales, picking up pugilists and fascinating fans across the breadth of its mighty span.

Soon after birth, British Warriors employed the training services of ex-champs Tim Witherspoon & Herol Graham and it wasn’t long before the ever-expanding empire began to attract the major television cameras of Eurosport, London Live and Channel Four (with their fighters also appearing on BBC, ITV, Sky & Box-Nation). Proving that it’s not just the big boys that can recruit the top-level staff and secure the superlative screen time.

In 2015, Mo & Greg, in partnership with Hellraiser promotions, signed a deal with London Live TV to bring free-to-view boxing into the homes of millions of fans across the English capital. In an interview with “Sean Talks Boxing” at the time, Mo told the interviewer that they planned to air…

And when asked what this new free-to-air deal meant for fans, Mo responded in frank fashion:

No bells. No whistles. No bull shit. Just boxing.

British Warriors came to South Wales in style, when they showcased breakthrough promise, the peerless Kieran Gething, in his biggest test since his destruction of seasoned battler Bradley Pryce. Gething, of course, won. As did British Warriors. And South Wales boxing fans. This local level promotion perhaps did more for Welsh boxing than the international circus had managed across two huge, star-studded events – events that absolutely put Cardiff on boxing’s world map but did little for the next generation of local talent.

With Priority Boxing Promotions planting their flag in Wales, however, the future looks a lot brighter across the Valleys.

Mo Prior and Greg Steene currently share the books on 40 fighters who are all hungry to make a noise on the national scene – and that book is growing faster than a welterweight eats carbs after weigh-in. British Warriors Promotions stand firm across the UK and beyond.

Thanks to the arrival of British Warriors (now Priority Boxing Promotions), Wales’ best boxers can now rest assured that they will get their chance to shine at a national level – and the fans can rest assured that British boxing is about to explode with a return to the domestic battles of days gone by.

Local level boxing is back.