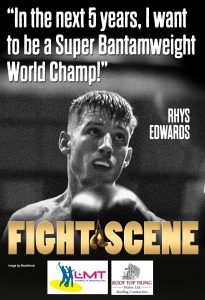 “The biggest thing that boxing has taught me would have to be confidence. That’s a big one for me. Its really given me a self-belief and made me feel stronger as a person and I think that has really helped me get to this stage today”.

Following family tradition is often a prominent thought in the mind of a youngster eager to impress their parents. It’s a concept which has kept fighting families alive for generations and one which has produced some of the most prolific fighters to enter the squared circle.

No matter the size or level of the fighting family, whether it be an underground bare-knuckle tradition or a world championship name, the honor in carrying the family torch is insurmountable.

Welsh prospect; Rhys Edwards (10-0) is the newest generation of fighting men to lace up the gloves.

“My Grandfather boxed in the Royal Marines and my father was a great amateur, and I’d always wanted to follow suit. I wanted to be like them” said the 19-year-old.

“Growing up, I used to love Joe Calzaghe; it amazed me how he was able to dominate Jeff Lacy like he did and that was something which really attracted me to the sport”.

The eager-minded kid from Tonypandy who they now call Rhys Lightning, was drawn to the sport from an early age, and much like his father would begin his campaign as a vested amateur in the Welsh national circuit. It wouldn’t take long for Edwards to ascend the rankings and capture the attention of Gary Lockett, who quickly snapped up the prospect to add to his prestigious stable at Llanrumney Phoenix ABC.

Now a licensed prizefighter with both the resources and skills required to make the grade at international level, Edwards is already looking to become the first member of the family to hoist a world title around his waist. In 2019 alone, the Super-Featherweight fought a staggering seven times, winning all his contests in convincing fashion, stopping two of his foes within the distance. 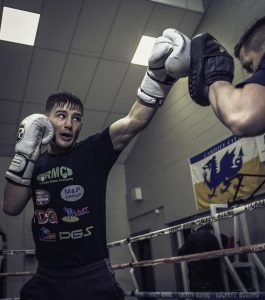 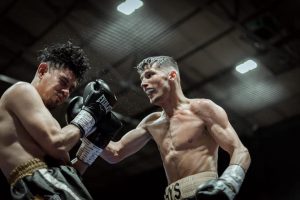 Edwards, who is still only 19-years-old, appears to be making all the necessary sacrifices needed to become a champion. More often that not, young fighters with limited experience all have the same mentality; to get through each fight as it comes. Although the Welshman still understands the importance of staying grounded within such a turbulent sport, there is no disguising the far-reaching aspirations that the youngster has.

“My plan for the end of this year is to capture a Welsh title. From there, I’d be looking to secure the British title at some stage, but its definitely a case of taking things as they come and not looking too far ahead”.

“If everything goes according to plan, in the next five years I want to be a Super Bantamweight World Champion. I’m fighting at Super Featherweight now, but I know for a fact that I can make the 9 stone limit and it does make sense to go down in the near future”.

Since lacing up his first pair of gloves as a youngster eager to follow in the footsteps of his predecessors, the sport has given the Welshman a fortitude of purpose in which Edwards has managed to transcend the achievements of his childhood heroes and begin writing his own story. In all of the lessons that boxing has taught him, Edwards credits his mentality over anything else in his early rise to domestic contention.

“The biggest thing that boxing has taught me would have to be confidence. That’s a big one for me. Its really given me a self-belief and made me feel stronger as a person and I think that has really helped me get to this stage today”.

Not only has boxing given him the personal characteristics fit for a champion, it has also correlated an able fighter who has shown glimpses of brilliance in the nine fights in his career to date. Rhys “Lighting”, who has since lived up to his alias, employs a sharp, European style jab that is intelligently used to craft openings and opportunities for credible power shots, which have resulted in four of Edwards nine opponents to fall at his feet. Much like his father, the Welshman carries a strong amateur pedigree in which the basics of his craft have been exercised to optimal condition, and with the help of experienced trainer Gary Lockett, these skills are only able to flourish further.

“In my last contest, I stopped my opponent (Stefan Sashev) with a lovely body shot. The second it landed I knew that he wasn’t going to get up. It was certainly an amazing feeling but focus quickly shifted to the next opponent (Jonny Phillips), who is a step-up in class for me. I still know I’ll beat him though; I would’ve beaten him in my debut really, I’m going to box his head off. I know I’ve got a fantastic jab and I plan on stopping him like the rest of them”.

Rhys would like to thank his army of followers, fans and sponsors for their continued support: Roof Top Tiling Wales, LMT Academy of Performing Arts plus many more 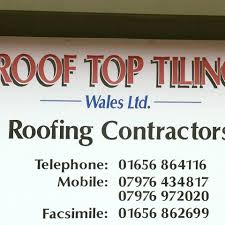 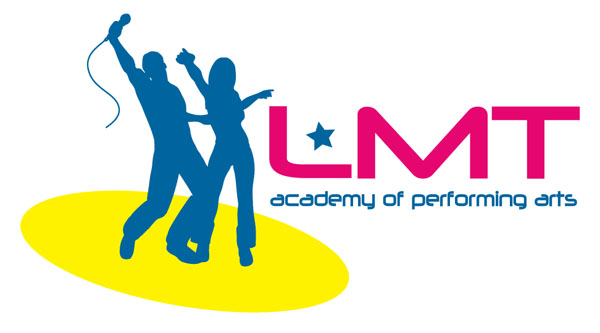