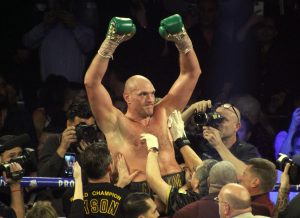 Wilder didn’t want to stop fighting, stressing he wanted to go out on his shield,  but Referee   Kenny Bayless saved him, by halting the bout at 1:39 of the seventh round.

Fury’s punctuating technical-knockout victory Saturday night was a much more conclusive result than the controversial split draw for which they settled in their first fight 14 months ago in Los Angeles. Back then, determined that outcome, but Fury made sure the scorecards weren’t necessary this time.

A booming left right combination dropped Wilder close to the end of round three.  He did very well to get up, showing immense bravery.  In the fifth  a series of big rights, and then Wilder went down from a crunching short left to the ribs.

In the seventh he absorbed a big left to the head, another and then a right, which rendered him wobbly piercing his guard.  His legs were  gone! The towel fluttered into the ring to save him from further punishment. 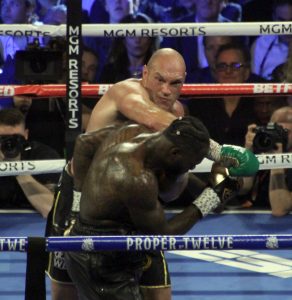 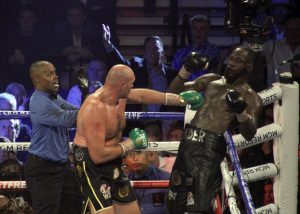 “I’m doing good,” Wilder told ESPN after suffering his first defeat. “Things like this happen. The best man won tonight, but my corner threw in the towel and I was ready to go out on my shield. I had of things going on heading into this fight. It is what it is, but I make no excuses tonight. I just wish my corner would have let me go out on my shield. I’m a warrior. He had a great performance and we will be back stronger.”

“A big shout out to Deontay Wilder,” Fury said. “He came here tonight and he manned up. And he really did show the heart of a champion. I hit him with a clean right that dropped him, and he got back up. He is a warrior. He will be back. He will be a champion again. But I will say, the king has returned to the top of the throne!”

Fury, 31, won the WBC title from Wilder that the Tuscaloosa, Alabama, favorite son  had held for five years.