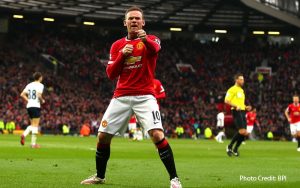 A 16-year-old boy completes his training in the fields of the Everton quarry in Liverpool. The team’s uniform is off, the boots have been removed, he farewells the rest of his teammates and coaching staff; He goes outside with a modest black suitcase, walks a few blocks and enters a gym.

There, in a fairly empty enclosure with a boxing ring in the middle, he gets ready to start training: his fists are wrapped, well-protected and he puts on his boxing gloves. Before starting to hit the bag, he gives himself a break to reflect about his father, his uncle and his brother.

Like a lightning strike on the ground, he begins to discharge the energy within. Swapping from one passion to another one. Little does he know that the next day he will make his debut in front of more than 40,000 fans at Goodison Park.

There is an almost symbiotic relationship between football and boxing in the life of Wayne Mark Rooney. In an interview for BBC, he explained how being in the ring has helped his performance on the field and beyond that, in his life.

The top scorer of the England National Team and Manchester United began his career at the age of nine, in the Liverpool academy, before a scout took him to be part of the Everton squad. At the age of 14,, he was already playing in the U19 squad. Two years later, at 16, he made his debut against Tottenham.

GREAT CONTRIBUTION OF THE RING

former DC United player confessed that in his teens he followed straight to the boxing gym after his football practice. The Englishman told the words as follows:

“I think that at a young age, boxing can do more for children than football, it keeps them out of the streets and out of complicated situations in which they can get involved.

It helps you develop as a person and work on your discipline, it helps you address goals as it did with me. Me being able to play in the Premier League at age 16 was thanks to the training I did in boxing. “It made me physically prepared, otherwise I wouldn’t have been able to compete with players like Sol Campbell and Martin Kewon.”

His strength and physical performance is sublime, every time Old Trafford’s number “10” has the ball, he shows an energy discharge and extraordinary body power, which, despite the tackles and fouls, lets Wayne Rooney pass between the lines as if he was entering within the ropes of the ring.

But boxing not only taught Wayne discipline and physical development, but it taught him what it is to have a boxer’s soul. Just as you should never stay on the canvas, you should never give up a ball; One should get up as soon as possible, get your guard up and keep fighting. Go, dribbling after dribbling, trying not to fall to reach the goal and score. Knocking out your opponent and scoring a hat trick.

The Wonder Boy even mentioned that boxing helps him stay physically in rhythm, every time he has injured his legs, he continues boxing. Recalling his young days as a boxer, he said he once knocked out his brother when his father gave them boxing gloves.

The current Derby County player’s family has boxers’ blood. His father, his brother and his uncle all practiced it and even the latter currently runs a gym near Croxteth, Liverpool (where he was born).

He is also a close friend of Ricky Hatton (welterweight and super lightweight boxing champion) and even held one of his championship belts in a fight in 2007. Although Hatton is a declared Manchester City fan, he maintains a great relationship with one of United’s top figures.

When he played with the Red Devils it was common for Wayne Rooney to invite boxers, teammates and friends to his house to practice. In a video, he appears boxing with Phil Bradlsey (Burnley’s defender) where the ex-red devil gets knocked out.

He later argued that he was not knocked out because the video is cut short. He got up and they kept fighting; by the time they were finished, Wayne’s nose was beat and Bradsley’s mouth was bleeding. Hours later he scored a goal against Tottenham which he celebrated by throwing a flurry of punches to finally fall, knocked out.