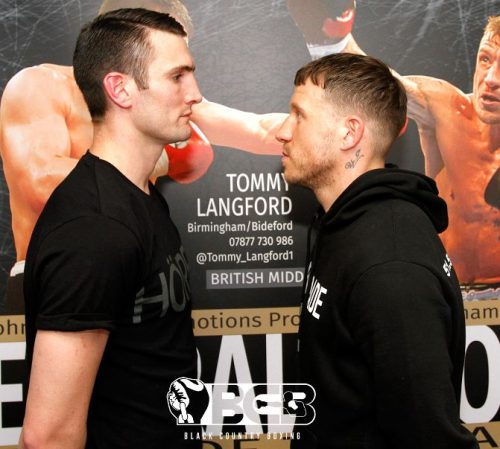 Jason Welborn is confident of ‘repeat’ rather than ‘revenge’ ahead of his eagerly—awaited British Middleweight Title rematch with Tommy Langford this weekend.

Welborn outgunned Langford in a British Boxing Board of Control nominated Fight of the Year contender back in May at Walsall Town Hall. Langford went in to that first bout as champion and clear favourite with Welborn out at 7/1 with the bookies. Those odds were turned on their head though as the WBC International Silver Champion recorded a deserved split-decision victory.

Welborn v Langford II takes place on the undercard of Amir Khan versus Samuel Vargas at the Arena Birmingham, live on Sky Sports on Saturday (8th September). It’s a fight that threatens to steal the show and 32 year-old Welborn is in confident mood.

“It was one of those fights where I wanted to do again, so to be able to do so live on Sky Sports, in a big arena, is perfect for us both.

“The first fight with me and Tommy should have been televised but we got it on a BCB show and it reached a big audience and attracted people’s attention, so we are grateful that Matchroom earmarked this fight for the Khan undercard.”

Although confident, Welborn is not resting on his laurels. He has complete respect for his opponent and, after sharing 12 tough rounds, knows he must be at his best to retain his title and inflict another defeat over Langford.

“It is one thing winning as the challenger; but it’s another defending it as champion,” Welborn added. “Langford will be desperate to even things up and get the belt back. He will be hungry so I can’t switch off and I know exactly what I have to do to keep my belt.

“That said I’m really confident. Langford struggles with fighters like myself and as long as my engine is as good as last time – and it will be – I can’t see anything other than another Welborn win.

“I think we will see the best Tommy Langford again and he will bring the best out of me. Our styles knit well.

“If anything now I am going to look for the stoppage and I think it will come.

“It nearly came last time, Terry O’Connor is a brilliant referee, but I do think he saved him last time out. If it comes; it comes. The only thing on my mind is a win. By any means.”

As well as Khan versus Vargas and Welborn v Langford II, there is a packed undercard this weekend.