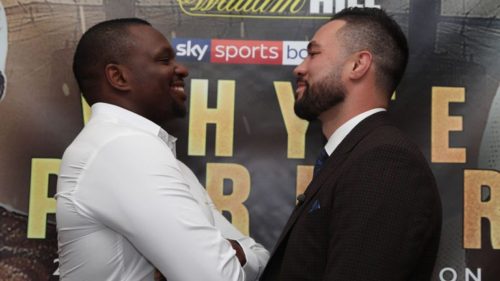 Dillian Whyte (23-1): 30 years old, from Brixton (originally Jamaica). Has just one loss, a knock out against Anthony Joshua.

Joseph Parker (24-1): 26 years old, from New Zealand. Has just one loss, a decision against Anthony Joshua.

(If you like a rough, raw Londoner with a big mouth and an even bigger right hand, vote Whyte. If you prefer a mild-mannered Kiwi gent who plays the guitar and wears three piece suits, vote Parker.)

WHY SHOULD I WATCH?

They’re also stylistic opposites. Whyte is a heavy handed banger with a 71% knock-out rating, who knocked AJ down in the amateurs (going on to win) and wobbled him in their pro fight.

Parker actually has a higher KO rating but his wins have largely been due to his wearing down of opponents using fancy footwork and rapid combinations. He’s not a power puncher like Whyte so will want to avoid the trenches.

There’s also a lot on the line. Both men have beaten everyone put in front of them apart from AJ and since they have him as a common opponent, a win for either man could put them in line for a rematch with the (almost) undisputed king of the heavyweights.

But on the flip-side, a loss could mean the end of either man’s career at world level.

Tough one. This is a true boxer versus puncher set up.

But Dillian Whyte, even though he’s the older man, seems to be on his way up, while some have argued that Parker is heading in the other direction.

Whyte has been looking at his destructive best lately, he has also weighed in a little heavier and has promised (as always) to bring the “PAAAAAAAAIN”!

Parker has a solid chin (never even wobbled) but Whyte may just have the shot that could change all that if the fight turns into a brawl.

And since Parker is looking to redeem himself after not taking the chance to go toe-to-toe with AJ, there’s a strong possibility this will happen.

If it helps sway your decision… Joshua has picked Whyte for the early knock out.

WHAT’S ON THE UNDERCARD?

The biggest fight on the undercard, almost a dual headliner, is Dereck Chisora v Carlos Takam.

Chisora needs little introduction. Just google any one of his previous press conferences and watch the furniture flying across the room (notably against Dillian Whyte, Tyson Fury and David Haye who all beat him in brutal battles).

Chisora is up against Takam, the man who stepped up as a last minute replacement to face AJ last year. Takam was looking like taking control of that fight until he was stopped on cuts, having caught AJ somewhat off guard.

ANYTHING ELSE ON THE CARD?

Absolutely, get on this one early.

Connor Benn rematches Cedrick Peynaud who gave him a furious fight last time out, with both men going down early. And the unstoppable Joshua Buatsi looks to continue his winning ways against Andrejs Pokumeiko.

The rest of the card is as follows – and every single meal on the menu is shaping up to be a delicious prospect.