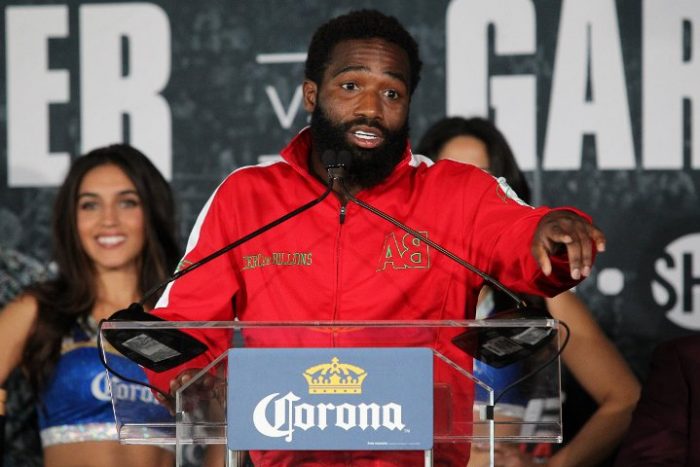 Adrien Broner let himself down again yesterday, when he decided to fire a vile verbal assault at his catchweight opponent for this Saturday night, Jessie Vargas, who brings to the contest 28 wins with just two losses to Timothy Bradley & Manny Pacquiao respectively.

But AB seemed to trip over his new growth of whiskers in the delivery of his rant and somehow managed to spray his vicious insults over Mayweather CEO, Leonard Ellerbe, calling him a “bitch-ass-n—-a” and prompting Ellerbe to respond with cool confidence, “you don’t disrespect me like that.”

Having started his losing streak a year prior to Vargas, when Marcos Maidana plucked his peacock feathers by repeatedly launching him across the ring to bounce off the ropes and back into a waiting mouthful of knuckles, you’d have thought that Broner may have dropped the Mayweather act by now, not added to it. Especially since he followed that loss up with similar fails against Shawn Porter & Mikey Garcia.

Unfortunately not. And whilst this does provide some level of entertainment & ticket sales, it also gets just a bit boring and distasteful.

Vargas, The Pride of Las Vegas, will enter the ring a little lighter than his bearded foe at the Barclay Center on Saturday and since he’s not a massive puncher either (just 33% KO’s), these two factors may just provide the edge that Broner needs to make a statement on his comeback from a decisive loss.

And this might be the kind of statement the fight scene actually DOES want to hear.

Win or lose, AB… perhaps it’s time to leave the trash talk to the folks at the top of their game.