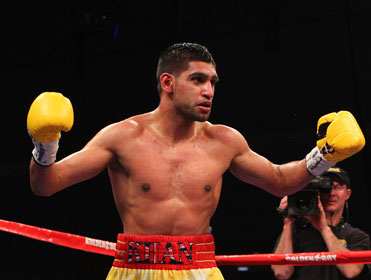 When Ricky Hatton retired, having not faced Junior Witter, he may have missed a trick.

Not that he can be blamed for fighting on American soil of course, since the likes of Team Mayweather and Pacquiao were offering more zeros and brighter lights for essentially the same risk.

But after losing those fights, in fairly dramatic fashion, there was an opportunity in the midsts: rather than rebuild his career on the world stage & begin all over again, struggling against mediocre paydays and smaller crowds, get back home for a local scrap against the next biggest pull. The one that your fans want to see. A true stadium fight.

In the years that followed, events such as Haye-Bellew, Froch-Groves & Joshua-Whyte proved that a home-grown grudge match will sell out a stadium faster than most travelling shows could ever dream.

And that brings us to Amir Khan versus Kell Brook… Khan’s very own Junior Witter, the Carl Froch to his Joe Calzaghe.

Brook is no stranger to a big crowd, a big payday and a big right hook either, so the prospect of Khan taking this as a tune up fight and a first step towards making that big British bust up come to life, is already whetting the appetites of fight fans across the country… and perhaps the world.

But first he has to get past Phil Lo Greco on Saturday night.

Lo Greco clearly got under Khan’s skin at the initial press conference, when remarks he made about Amir’s personal life led to Khan launching a glass of water in his face. The water, not the glass, let’s not dress it up as anything beyond a spat. In fact, Khan seemed to be the picture of cool immediately after his reaction, as if it were a completely justifiable response to disrespectful comments. Maybe it was.

But at the final press conference yesterday, all was smooth. Especially Khan. Does this talk to his improved mental state since admitting that his celebrity lifestyle may have led to some ill-advised decisions? Perhaps.

And for the sake of boxing, let’s hope so. If Khan, who’s just signed a three fight deal with Eddie Hearn at Matchroom Boxing, can build his career back on home turf, there will be no end of welterweight’s looking to join him in the centre of a ring.

And following off the back of Anthony Joshua’s success, that can only mean a massive win for British Boxing.