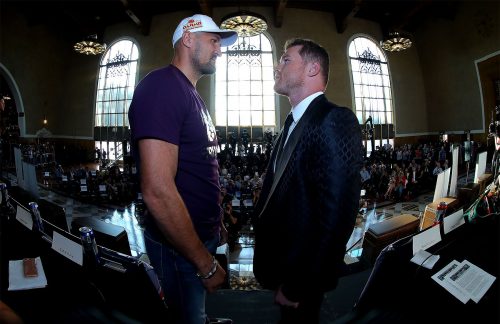 ÁLVAREZ AND KOVALEV FACE TO FACE IN LOS ANGELES

Canelo Alvarez (52-1-2, 35 KOs) of Guadalajara, Mexico and Russian warrior Sergey “Krusher” Kovalev (34-3-1, 29 KOs) organized a press conference recently in Los Angeles, California, to officially announce his 12-round clash. The event will take place on Saturday, November 2 at the MGM Grand Garden Arena in Las Vegas and will be broadcast live on DAZN.

“I am very grateful to all the fans as always. I am very motivated, it is an honor for me to share the ring with someone Kovalev, whom I met in 2012. Now we are about to make history. I know it will be the most difficult fight of my professional career. I will do my best in the ring and that day we can shout “Long live Mexico.” 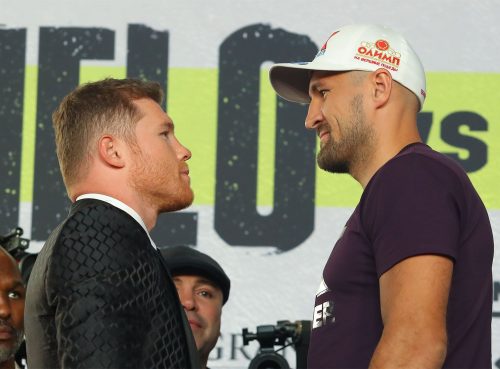 “I am very happy to be here in Los Angeles. Thank God and thanks to Canelo and his team for getting this fight. I think this is a great test for me in my boxing career because he is one of the best fighters at the moment. I am happy and excited. Thanks for the support “.

“Thanks to Golden Boy and DAZN. It was a very difficult fight to achieve, but the fight is already here. Only the great boxers and those who leave their mark become such fighters. We know Kovalev well and we know the challenge we are facing. He is a great boxer who leaves everything in the ring and in one blow, he could end the fight. And we know it will be a great challenge. We want Saul to be a champion in four weight classes. ”

“I’m nostalgic and I can’t help remembering the beginnings of all this. Look back and I see everything: all the victories Saul has given me and my son, and future victories, make me happy. The Reynoso have been with Saul for more than 15 years, since he was a child. We trust that he will get the victory here. ”

“Both types are true champions. Cinnamon, I’ve always admired you. Your coaches did a great job with you. I have to admit it. I really take my hat off for having the balls to step forward and live up to the challenge. Sergey, I love you to death, I respect you for accepting the challenge. Honestly, the only losers on November 2 are the people who don’t want the fight or come the fight. ”

“I don’t think this fight should be announced further. When you hear the names of Canelo Alvarez, Krusher Kovalev, that says everything that will happen on November 2. I don’t need to talk about Sergey: everyone knows who he is in boxing, and regarding Canelo, they know what they mean when they say: great kojones. ”

Cinnamon vs. Kovalev is a 12-round fight in the semi-complete weight division presented by Golden Boy, Main Events and Krusher Promotions. The event will take place on Saturday, November 2 at the MGM Grand Garden Arena in Las Vegas and will be broadcast live exclusively on DAZN.