Menu
VINNY PAZ Brings it to THE MIDLANDS 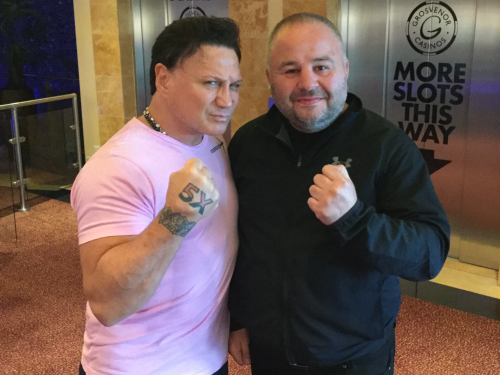 Vinny Paz (left) pictured with Jason Lowe
When all is kind of going good for you, then BAM! you find yourself clinging on to life with a broken neck and little hope. Everything looks to be fading away inch by inch, day by day.
Most people would give up and accept defeat letting nature take its course.
Not Vinny Paz.
Vinny had just won the biggest fight of his life by beating Gilbert Dele.
Born in Lamenting, Guadeloupe was residing in France, Dele was unbeaten and one tough cookie.
Vinny won by TKO and became the new WBA World Super Welterweight champion and he did it at the Civic Center, Province, Rhode Island, his home town.
Shortly after winning the junior middleweight world title, Pazienza was forced to relinquish the title after a serious car accident which broke his neck. Doctors informed him he might never walk again and certainly never fight again. Pazienza had to wear a medical device called a Halo, a circular metal brace screwed into the skull in four spots and propped up with four metal rods.
Pazienza had the Halo screwed to his skull for 3 months, during this time he maintained a workout regime, despite disobeying his doctors orders. Pazienza returned to the ring thirteen months after the accident and beat future WBC World Jr. Middleweight Champion Luis Santana via a 10-round decision.
It is considered the greatest comeback in boxing history.
Last year the film ‘BLEED FOR THIS’ was released and it was taken by the boxing world as a must see.
Vinny’s life was not known outside of the USA really. He had fought to Uk fighters, Llyod Honeyghan and also Herol Bomber Graham.
Herol beat Vinny when they met at The Wembley Stadium in 1997 for the WBC International Super Middleweight Title.
When you  look at some of the other names Vinny fought in his days you would wonder why he is not or was not really a well known name over here.
Joe Frazier Jnr, Greg Haugen, Roger Mayweather, Hector Camacho, Roberto Duran x 2, Roy Jones Jnr, Pat Lawler & Eric Lucas.
Vinny won 5 World Titles and retired in 2004, amassing a record of 50 wins but with 10 losses.
In his first U.K. Tour Vinny stopped off for promoter Les Allen. Les is the son of the former late Coventry based professional fighter Les Allen Snr who in his boxing days won The Midlands Area Middleweight Title and fought names such as Pat McAteer, Lee Lazar, Freddie Cross, George Aldridge and Terry Downes who Les Beat on points.
The venue was the Grosvenor Casino, Ricoh Aren in Coventry and up to 200 fight fans welcomed  Vinny by standing ovation.
Former World, European and British Champion John H Stracey was also special guest for the event and to listen to Vinny talk frankly about his life in boxing to the strain he had with Lou Duva.
Loosing to Roger Mayweather was down to dieting and how he wishes he got the return fight with Roy Jones Jnr.
His friendship with Ray Mancini, the love from his father and Kevin Rooney, then the horrors of his car crash and the depression, the anger, the gambling addiction that seen him spends thousands of dollars at casinos.
Followed by the rebuild back so he could jump back in and become a World Champion again despite medical advice advising otherwise.
He also talks about his life film and his friendship with main actors Miles Teller, Aaron Eckhart, Kate Sagal and Ciaran Hinds.
Vinny is covering the UK on shows for the next month and will be seen at The Premier Suite at The Bar Sports this Wednesday evening.
Former World Super a Middleweight Champion  Ritchie Woodall will be the guest speaker to interview Vinny at that event which is Vinny’s first UK tour.
Watch the film on Vinny’s life BLEED FOR THIS and you will know why this champion is a must to meet and see.
The inspirational vibe he gives off is unreal and he so down to earth.
Vinny is a Knock Out and you will kick yourself if you don’t catch him on this tour.
By Jason Lowe