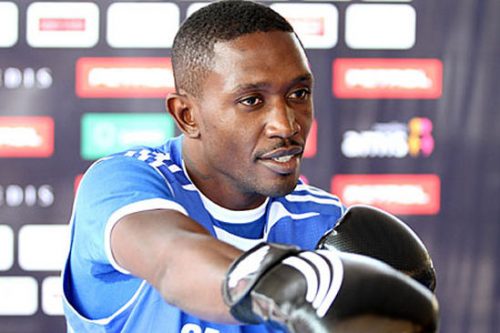 World Boxing Federation (WBF) World Welterweight Champion Bethuel Ushona, 35-5-1 (19), from Namibia will make the first defense of his title against Russian challenger Roman Belaev, 16-2 (11), on Saturday July 1 at the Ramatex Hall in Windhoek.

Born, raised and still residing in Windhoek, Ushona won the title when he decisioned tough former European titlist Rafal Jackiewicz from Poland last December, and now he is ready for his anticipated return, in front of his many adoring home-town fans.

After six months of inactivity, Ushona is eager to get back in the ring. While he claims to know very little about the man who will try to take the title from him, he is adamant that he is not taking anything for granted, and that he is in no way underestimating Belaev:

“The title-defense has been a long time coming. But I knew the day would come, and we are ready. I wont say that we know what the other guy is all about. All I can say is that we are prepared, and I feel good”, Ushona told media at a recent press conference to announce the fight.

26-year-old Belaev is considerably younger than the defending champion (35), but he is still an accomplished boxer with several titles and victories over good opponents on his resume. Based in Germany, he turned pro in 2010 and won the IBF Youth title in April of 2013.

Two months later he won the WBF Intercontinental title, and in February of 2014 he added the WBA Continental belt to his collection when he defeated Irishman Dean Byrne on the Gennady Golovkin vs. Osumanu Adama undercard in Monaco.

The following November he travelled to South Africa to challenge for the IBO World Welterweight title against Ali Funeka, a former WBF World Champion, but lost the fight by eleventh round technical decision. That, along with a points-loss to 18-0 Paul Kamanga, is the only blemish on his professional ledger.