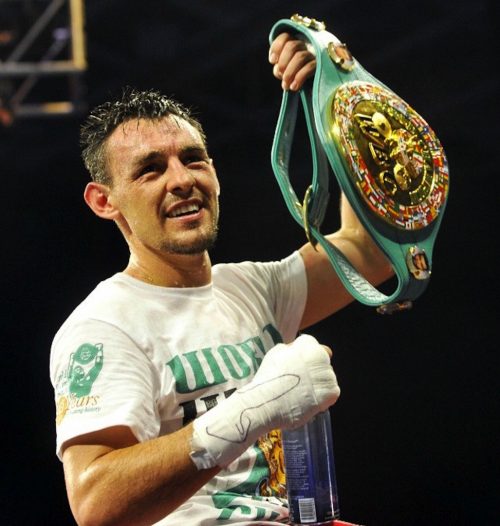 “I want to thank God for allowing me to have a wonderful career. I’m a kid from a small town in Gilroy, California, who made it to the mountain top of the boxing world. When I was a young kid growing up, I always believed in myself, but never in my wildest dreams would I have imagined a small-town kid like myself, would be fighting in front of millions of fans.

“I was blessed to win multiple world titles in four-divisions. A boxer’s career is a long and tough road. Many tears were shed, lots of blood, and tons of sweat. Many miles were travelled, thousands of rounds sparred, none were easy and nothing was ever given to me. I earned everything I got the old fashion way. I never ducked anyone and fought the best fighters in the world. I fought my way through every obstacle to make sure my fans enjoyed every second, of every round, of my fights.

“I want to thank some very important people in my career starting with the most important person, my wife Casey, who has been with me every step of the way. My father/trainer Ruben Guerrero Sr. He’s the one who made me the man I am today, and the champion I was in the ring. One of the best trainers in the world and I hope to be working side by side with him in the future.  There are so many people who have helped me, if I leave anyone off, thank you for everything.”

The “Ghost” (33-6-1, 18 KOs) conquered world titles in featherweight and super featherweight. It was always people’s taste for their aggressive style of fighting and never giving up.

In 2012 he achieved his most important victory defeating former WBC welterweight champion Andre Berto in just his second bout at 147 pounds. For his next fight he faced Floyd ‘Money’ Mayweather, losing by decision but winning the best purse bid of his career.