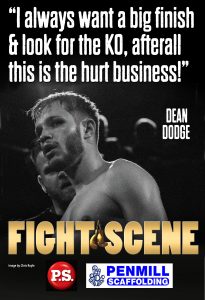 “Always remember where you come from, you should never forget your roots. They have helped make you what you are today, so no matter how far you get in life remember how important it is to stay humble”.

At the very top of the scale stand the prestigious greats like Floyd ‘Money’ Mayweather. People often see the array of super cars and luxury condominiums and overlook the path it took to reach such a point.

26-year-old Dean Dodge’s story is a tale of grit and determination that epitomises the very meaning of hard work.

At the fruitful age of 11, Dean found his way into boxing through playing football.

“Like a lot of young kids, I wanted to be a professional footballer. My coach sent me down the gym to help increase my fitness and from there I discovered the sport of boxing”.

“I spent most of my amateur career at Yeovil ABC. I left when I turned 15 and ended up coming back at 18, since then I’ve dedicated my life to it”.

After a successful stint in the amateurs, Dean decided it was time to progress through the ranks and become a professional fighter but, plans began to fall through, which resulted in some major setbacks for the young boxer.

“I had around 45 at amateur level and I was boxing at an elite level, so in 2016 I decided to turn pro. Unfortunately, it wasn’t to be, I failed my medical and after that things started to spiral”.

“Life started to test me. I ended up losing my job and became homeless, I was spending cold nights in the car until some close friends were able to help me out and give me a place to stay”.

With the support of those close to him, Dean was able to take steps in the right direction and move one step closer to bouncing back.

“I knew it was time to get back on my feet, so I started searching for a new job. Luckily, I found work fairly soon and this was around the same time I met my trainer, Dean Lewis and together we worked at getting back in the ring”.

Things certainly weren’t going to get easier for Dean, he still had a tough road ahead of him if he was to bounce back stronger than ever.

“I remember having to wake up at 5.30am to get to work for 6am. I’d work in a factory from 6 until 2pm and then I’d commute to the gym, which was a one-and-a-half-hour journey. I’d train and then head home. In total it was a two-and-a-half-hour round trip and I would do it at least three times a week in order to train with Dean”.

“Eventually, I contested my medical and I had my licence rightfully returned to me and just like that I was back and now I’m undefeated in nine fights”.

Now three years into the fight scene, Dean has strung together an impressive nine straight wins and is evidently learning a lot each time he steps out into the square circle. 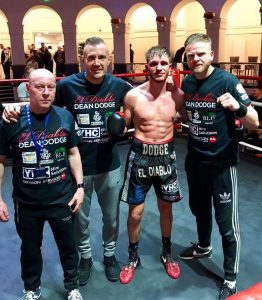 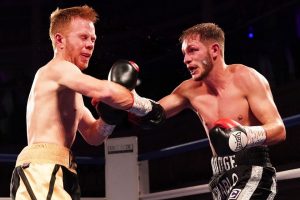 “Once I started stepping up to the six round fights I found that I had a lot more time and I didn’t have to rush as much as I did in the four round contests, where opponents would try and run and I’d have to rush to try and stop them. The six rounders have definitely taught me how to stay composed, so I’m more disciplined in that respect”.

Across those three years, Dean has also been able to craft and enhance his favoured and deadliest tool, the left hook body shot.

“As fights start to head into the later rounds and your opponent starts to gas out, a left hook to the body can really finish them off”.

“To perfect it, it’s all about repetition, doing it over and over again. I’ll do repetitional pad work, lots of drills and I try to use it a lot when I’m sparring to make sure it’s ready for fight night”.

One thing that many professional fighters have in common is a great source of inspiration, whether that comes from someone close by or from one of the all-time greats and hall of famers within the fight scene. Dean’s source of inspiration comes from Marcos Maidana, a former world champion that he can relate to on more than just a competitive level.

“I respect that he has a real rag to riches story. He grew up in a tough environment in Argentina and basically carved this fighter, a world champion fighter out of nothing. I like that he didn’t stand for any madness and he was always a humble guy”.

“I like his aggressive style and it’s something I try to emulate, I would say I’m an aggressive fighter and like Maidana when he started out, I haven’t got a lot going for me financially but, I’ve got that hunger and I’ve got heart”.

Dean will look to record his tenth consecutive win and retain his undefeated status on the 21st of February and preparations for that battle against Sean Davis are well underway.

“Every camp I’ve had in the past I usually end up with some sort of niggle or injury but, this time around I’ve had no injuries, no sprained ankles and no bad hands, so everything is going weirdly at one hundred percent”.

Dean’s message to the fans was nothing short of thrilling as he weighs up for an exciting bout at the Wellsprings Leisure Centre in Taunton.

“Expect carnage, expect aggression and expect violence. That is what I’m there to give out and that’s what I like to give to the fans, a show. I’m a fan-friendly fighter”.

Looking beyond the 21st of February, Dean is brimming with ambition to progress through the ranks and earn his way to cement his name on a title fight.

“In the short term I hope there are some big opportunities on the way, this is something I’ll have to discuss with my manager but, I’d love a southern area title fight or an English title fight”.

“Long term, I definitely want to become the British Champion, one hundred percent”.

Dean finished up with a message that represents the man that has made his way up from nothing, lost it all and bounced back to become even stronger.

“Always remember where you come from, you should never forget your roots. They have helped make you what you are today, so no matter how far you get in life remember how important it is to stay humble”.