The popular eat-fest returns to Cardiff this Easter, to coincide with Anthony Joshua’s unification bout against Joseph Parker. 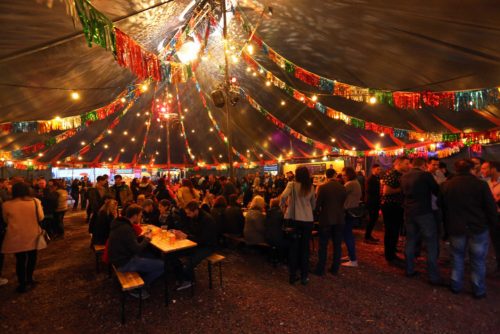 It’s one of those terms that I’ve never entirely trusted. If I can get it on the street, why would I go to a restaurant?

Or indeed… a circus?

But on arrival at the Cardiff Street Food Circus, that question answered itself.

As I entered Sophia Gardens, the gentle glow of purple and green lights, shimmering off the giant trees which circle the festival, set a scene straight out of a film by Burton, Anderson or Del Toro.

This is a small, intimate, private and colourful affair, shrouded in a navy-blue blanket of sky above the capital.

Before I’d even entered the main gate, which presented itself through a narrow line of trees off the river path… and before the scent in the summer air had had its chance to fully tantalise my senses… I was already intrigued. Drawn in by the soft sounds of steel drums, chitter-chatter and sizzling meats.

Inside, the Caribbean tunes buzzed quietly, non-intrusively, under a central, open sided circus-dome, decorated in a neat fusion of Goa and Butlins.

The giant disco ball showered sparkling flecks of light across matching formica tables and chairs, where street-food-scoffers gathered at individual tables, or dragged them together to suit larger groups.

Beneath the multi-coloured bunting, mums and dads drank craft beers and ciders from trendy paper cups, aunties and uncles manoeuvred prams in place of chairs, cousins chased kids through the gaps in tables. The street food circus, like most others, is very much a family affair.

Ready for food, I began to peruse the brightly painted vans which formed a ring around the circus tent… Venezuelan lamb and Keralan chicken were sharing an equal chance of victory in the battle of my stomach, until I spotted Brother Thai.

Being a seasoned traveller to Thailand – and a bit of a snob about it – I’ve tended to avoid Thai street food over here. It doesn’t look like anything I’ve ever eaten over there, I’d insist, boring my friends to starvation.

And Brother, was that a mistake. This was the stuff of Nirvana. If my former self was not enlightened enough to appreciate the physical and spiritual journeys of my youth… then by Buddha, I found myself on that Friday night.

Between the randomly placed tuk-tuks (*one of which was the beautifully ornate Little Tipple Van, owned by the extremely lovely and constantly busy Kerry), the Singha beer stand and the dance of chilli, beef and coconut on my tongue… I was not only transported back to Thailand, but to a spectacular dream-like version of the trip.

The Sticky Spicy Beef, in a naan-style wrap, was a bargain at £6 – full to busting with hot, sweet and melt-in-the-mouth slices of beef.

So good was it that my own jealous brother ran to get his own.

If you have the urge to book a last minute trip this summer… save yourself the air fare.

Get down to Cardiff’s Street Food Circus and you can travel around the world in 80 eats.