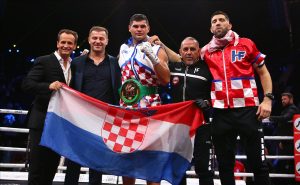 Following a blockbuster year for Croatian heavyweight sensation Filip Hrgović (10-0, 8 KOs) and German teenage prodigy Sophie Alisch (5-0, 1 KO) both have been nominated for the WBC’s ‘Prospect of the Year’ Award for 2019.

Hrgović started the year in style, marking his American debut with a first-round knockout win over Gregory Corbin at the MGM National Harbor in Maryland, successfully defending his WBC International title for the first time.

‘El Animal’ then headed to Hermosillo, where he made quick work of local hero Mario Heredia. The referee waved off proceedings one minute into the third round following a brutal attack that sent the Mexican tumbling to the canvas.

The Olympic Bronze medalist then continued his impressive campaign on the biggest card of the year as he faced two-time World title challenger Eric Molina on the undercard of Joshua-Ruiz 2 in Diriyah, Saudi Arabia. Hrgović once again ruled supreme as he forced the stoppage in the third round having dropped the American multiple times on route to sealing his tenth professional win.

Now ranked seventh with the WBC, eighth with the IBF and fifteenth with the WBO, Hrgović is considered one of the hottest prospects in the heavyweight division as he closes in on a World title shot in 2020.

“Myself and my team are very satisfied with 2019,” said Hrgović. “I got three good wins, made my debut in America, fought in Mexico and I got to fight on the most anticipated fight night of the year in Saudi Arabia.

“The highlight of 2019 was fighting on the Ruiz Joshua 2 card. The whole world was waiting to see what was going to happen and it was a huge honour to be part of such a show. I will take 2020 step by step and continue my winning streak.” 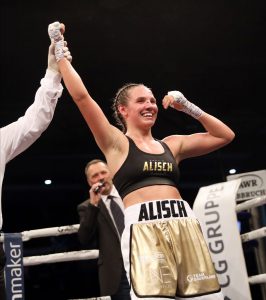 18-year-old Alisch has been nominated in the women’s category following a magnificent 2019 that began with a knockout victory on her professional debut on February 16th in Koblenz, and concluded with an eight-round shutout points victory over two-time World title challenger Irma Adler in November.

Alisch, who won all five fights in her maiden year as a professional, is keeping her feet on the ground and hopes a successful 2020 will edge her closer to achieving her ultimate dream of becoming World Champion.

“2019 was a fantastic year for me. I got a knockout on my professional debut and ended the year with 5 victories, but we are only just beginning,” said Alisch.

“Making my debut was incredibly special for me, it was the first step towards my dream of becoming a World Champion. 2019 was full of highlights but you are only as good as your last fight. I prefer to look forward than backwards.

“My goal has been the same since I started boxing – to become a World Champion. 2020 is about chasing dreams. I want to thank everyone who has helped me on my journey so far and I look forward to sharing more success with you in the future.”

Promoter Nisse Sauerland was pleased to see two of Team Sauerland’s brightest stars among the WBC’s nominations for their annual awards, and predicts 2020 will bring even greater success for the talented duo.

“It’s great to see the WBC recognising Filip and Sophie for their fantastic achievements in 2019,” said Sauerland.

“We see Filip as a contender rather than prospect as he is becoming a global star. He boxed in three different countries last year and won all of them by knockout. 2020 will be an even greater year. It’s now just a matter of time until he fights for a world title.

“Sophie has made a blistering start to her professional career. She knocked out her opponent in the first minute of her debut and she hasn’t slowed down since. She has only just turned 18 and is already beating World title challengers. She is known as ‘The Future’ in Germany and we expect her to be the face of female boxing for many years to come.”