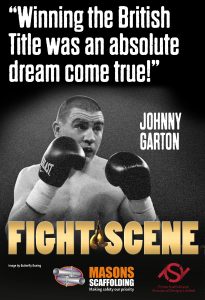 When I retire, I’ll probably take a year just to take that step back from it totally and so I can spend time with my family. I know that I will miss it and I will find it hard because it’s played such a huge role in my life”.

Johnny ‘The Pexican’ Garton, a seasoned professional in the fight game enters his last year as a professional fighter. The former British champion looks to seek revenge on the fighter that took his crown in hope of sitting atop the tree again. Johnny walks us through his last year in the sport and takes us on a trip down memory lane, looking at where it all began and the standout moments in what has been an impressive fighting career.

At 18 years of age, Garton embraced the pleasures that early adulthood brings, that of course is the sport of binge drinking and late nights spent trying to muster up an order in Peckham’s local takeaways.

Looking back, Johnny can thank the sambuca-filled weekends for unearthing his boxing talent.

“I started going to the LYNNN AC when I was 18, just to lose some weight.  At the time I was going out drinking a lot and eating too much junk food, so I needed something to get the weight off”.

Fast forward 12 years and a quick look across Garton’s resume will tell you all you need to know about this fighters veterancy and experience within the fight scene.

The Pexican currently boasts and impressive 24 wins and two losses and has once laid claim to the British welterweight title.

Garton’s taste of lucrative silverware was successfully quenched back in October of 2018. A battle at the Brentwood Centre saw the 32-year-old crowned as the British champion over his opponent Gary Corcoran. This fight would be remembered in high regard as of Johnny Garton’s many nights in the ring. 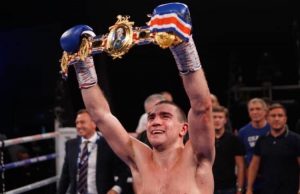 “This was by far my best night in boxing. To win the British title was an absolute dream come true and it’s something that I’d never thought I could achieve”.

“This fight was nominated for fight of the year but, it was Carl Frampton who ended up nicking that award”.

“I’ve had some amazing nights. I remember at the start of my career, not many people believed I would go on to win the Southern Area title but, I did, and I went on to defend it twice and then won the English title. From there I had a cracking fight for the IBF European belt, so I would say I’ve had my fair share of great nights in boxing”.

After successfully becoming the British champion, Garton faced his first defence of the belt in March last year. The Pexican faced off against Chris Jenkins at Kensington’s Royal Albert Hall, a venue treasure for it’s hosting of spectacular concerts and events and this rendition of a British title fight certainly fit the bill.

Chris Jenkins emerged victorious on the night earning a unanimous decision on the scorecards and becoming the new British champion. Garton struggled to shift through the gears in the fight and is fully aware that his performance was far from what we’ve become accustomed to.

“It was a good fight but, it didn’t go my way. I decided to take a break after the fight because I didn’t feel myself in there. The whole time I’ve been a pro I’ve never taken a break and I think that was a big factor in my fight with Chris, not to take anything away from him”.

“There’s a few mistakes I’ve had for a while and I think Chris exposed them on the night”.

One year on and the former British champion has the steppingstone to become the champion once more. Johnny Garton is scheduled to take on Chris Jenkins in what is a highly anticipated shot at revenge for the Pexican at the O2 arena.

“This is going to be a non-stop great fight; you will see a better me I know that for a fact. Just expect an all-out war from start to finish”.

“After the first fight with Chris I had the opportunity to fight Connor Benn or I could have a rematch with Chris. I chose the rematch because Chris Jenkins has something of mine, and I want it back.”

“This fight is personal to me; he beat me and took my belt and I don’t like getting beat. I like Chris, I’ve got a lot of respect for him but, at the end of the day he beat me, so I want my revenge”.

As his boxing career draws to a close will Garton pursue a life driving young fighters in the gym crafting future champions or will he put down the laced gloves for good?

“I like the idea of coaching. If I was to go into that I’d probably start in the amateurs and go from there, but when I retire, I think I will take a break from boxing. I’ll probably take a year just to take that step back from it totally and so I can spend time with my family. I know that I will miss it and I will find it hard because it’s played such a huge role in my life”.

Garton finished off with a message to those who have stuck by him throughout his career, the supporters and fans that show their appreciation at each fight.

“I can’t thank them enough, they have been incredible throughout this journey, they’re always loud and the atmosphere is always electric. People always comment about my support because they are so loud and rowdy, they make the night even better”.

“I’d like to thank all my sponsors and my team and everyone that has stuck by me, they have all been brilliant”.

Johnny Would like to thank his loyal army of followers, supports, sponsors and fans for the continued support