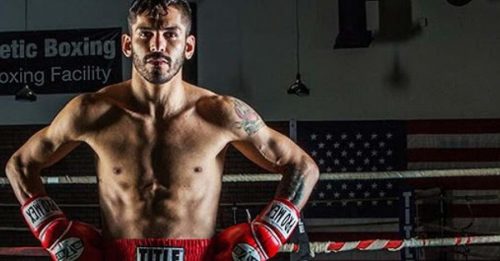 After  an exciting battle in May 2018 against the Ukrainian idol, Vasily Lomachenko, the former world champion in 3 divisions,  Venezuelan Jorge Linares, will enter the ring on Saturday night, determined to return to the Boxing’s  elite..

“I have prepared very well for this fight, I am training with Jorge Zerpa. We worked together 11 years ago when I fought for my first world title against Oscar” Chololo “Larios, in Las Vegas.

“I had been thinking about moving to 140 pounds for some time, and when the opportunity to fight against Lomachenko came up, I took the fight at 135 pounds even though it was already difficult for me.”

“If I could fight him again, I would, but for now I’m going to look for more opportunities at 140. A fight with Mikey Garcia or Jose Ramirez would be great. But  I have to stay focused on the opponent in front of me. Cotto is hard.

Linares is looking to place himself in another world champion position, but this time as a super lightweight against Abner Cotto.

Jorge Linares vs. Abner Cotto will be the main event of a card presented by Golden Boy Promotions at the Fantasy Springs Casino, Indio.

Cotto,of Caguas, Puerto Rico, has deep roots in boxing as one of the faces of the legendary boxing family. The hungry fighter became enamored with the sport at 10-years old, receiving training from Efraín Román in Aguas Buenas’ municipal gymnasium. With a rich amateur background where he participated in national championships and represented Puerto Rico in the Pan-American Games, the accolades he received translated into an impressive professional career where he triumphed over notable contenders. Cotto has been on a five-win streak since his devastating loss against Javier Fortunaand will be looking to reestablish himself as a worthy contender with a victory against Linares in the super lightweight division.

“I feel very excited for this new opportunity that this sport offers me,” said Abner Cotto. “I’m immensely grateful to my team and my promoters for bringing my career back to the highest. This is a sport where I have fallen, but with the support of my family, my people and the commitment of my team, I have returned with much more desire to achieve the goal I have always dreamed of since I was 10 years old, which is to challenge for a world title. My promoter has placed all its trust in me, and I will work tirelessly to achieve the goals set. Thanks to all who made this great fight possible. Expect one full of emotion.” (Golden Boy Promotions)

Linares vs. Cotto is a 12-round super lightweight fight presented by Golden

Boy Promotions in association with Teiken Promotions and Miguel Cotto Promotions. The event is sponsored by Tecate,”THE OFFICIAL BEER OF BOXING,” and Hennessy, “Never Stop, Never Settle.” The fights will take place Saturday, Sept. 29, 2018 at Fantasy Springs Resort Casino in Indio, Calif. The action will be  streamed live globally on Facebook Watch via the Golden Boy Fight Night Page. 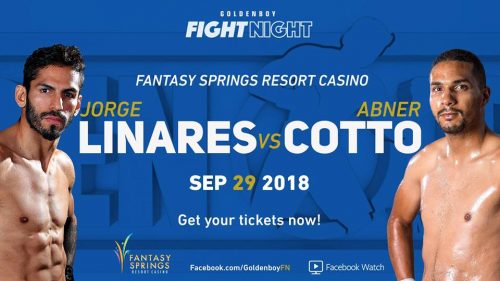