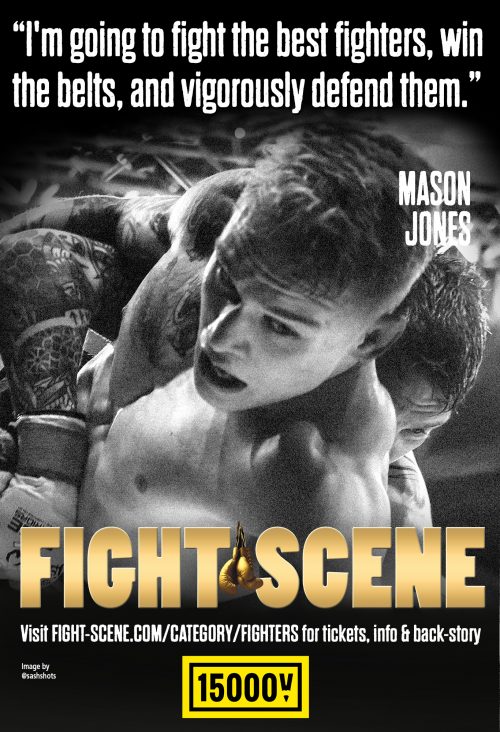 “The first mistake you made was signing the dotted line with my name at the top….try not to make any more.”

Ursula K. Le Guin said “It is one thing to read about dragons, it is another thing to meet one.” This couldn’t have been more true for Aleksi Mäntykivi, who stood across from one at the main event of Cage Warriors 108 in Cardiff.

Mason “The Dragon” Jones set the Viola Arena alight as he walked out to a jubilant hometown crowd. Welsh through and through, Jones confidently swaggered down to the cage wearing the welsh flag draped over him like his second skin. Facing a solid fighter and strong striker in Finland’s Mäntykivi, someone very capable of taking Jones’ unbeaten record away from him. However, with momentum on his side and a skillset envied by most in the lightweight division, the Welsh support would always see their man across the line as he headlined the card. 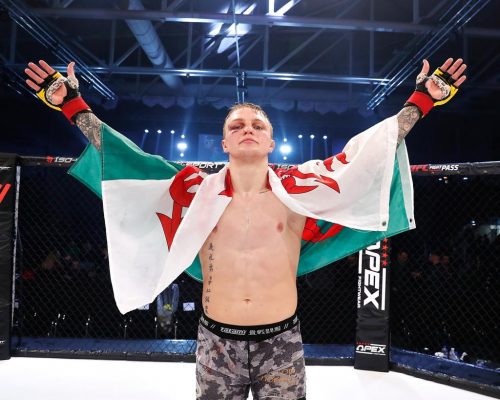 “Fighting in Cardiff is indescribable,” Jones says. “Not only is it the capital of Wales, my home, but the crowd is always electric. Everyone’s roaring and shouting your name, whether they’re looking for you to succeed or fail, they’re all watching me.” Off the back of two big wins, Mäntykivi wasn’t the only fighter in the cage with momentum. A test that would further teach us about Mason Jones as a fighter.

Jones went on to produce a stunning win in the main event, and couldn’t have looked more at home with the bright lights and keen eyes watching on. With one of the most mature performances of his career to date, Jones starting the bout exchanging shots on the feet, and began to feel his striking started to damage the Fin.

“At end of the first round I thought I was going to finish him on the feet after rocking him on 3 consecutive occasions,” he says. “I got a bit overzealous and traded without being as clinical, and ended up with a cut.”

Emphasising the mature head on the shoulders of a fighter still evolving, Jones admittedly recognised the cut had the potential to cause him some grief, and opted for other skills in his well-rounded arsenal to take the fight an alternate route. With a feeling of regret in not securing the finish with a kimura in deep, a lesson was learnt that night for the young Welshman. “After that (the cut) I obviously took him down, secured the Kimora but started to run out of time. Looking back, I made a few mistakes that cost me the finish. Mistakes I won’t be making again.”

The fire in “The Dragon” is only going to burn with greater potency as he continues to fight hard and train hard. Big opportunities to train at one of THE most famous gyms in the MMA world, Team Alpha Male, certainly won’t hurt his chances of developing into one of the world’s best fighters either.

Team Alpha Male is primarily based in California, and has been represented by fighters like former UFC Bantamweight Cody Garbrandt, Urijah Faber and Chad Mendes to name a few. “Training at Team Alpha Male is exceptional, there’s close to 20 UFC/Bellator/One Fc fighters on the mats at one time,” Jones says. “I’ve found some amazing sparring partners there that have really pushed my game to the next level, I will definitely be going back soon.”

A fighter with huge plans for his own future, this is a perfect environment to be in for a fighter with gold on his mind. Surrounding himself with top fighters at Team Alpha Male will help refine the young fighters’ abilities and help him climb his way to the top of the division. 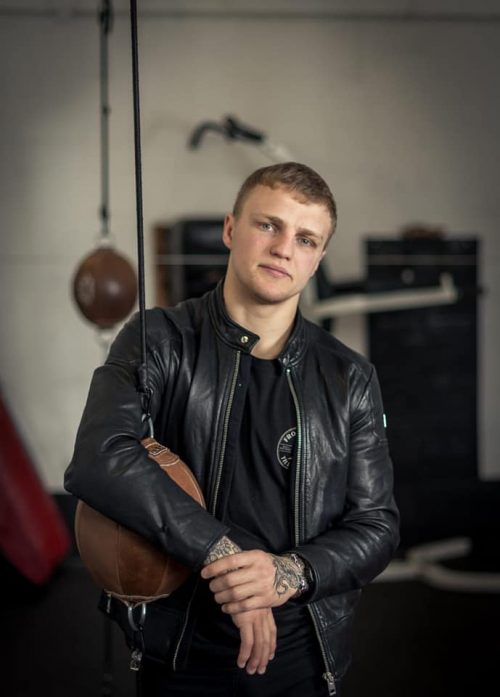 “My ambitions for the future are to fight my way to the top of the UFC Lightweight division and destroy the best they have to offer. Set myself up with a solid investment portfolio and make a nice exit when the time is right and I’ve accomplished all my ambitions.”

Fulfilling ambitions of greatness requires a winning mentality, and even at the age of 24, Jones possesses maturity beyond his years in knowing what is required of him to achieve what he wants in the sport. “I motivate myself by reminding myself of my goals, how far I’ve come and how far I’ve still got to go before I’m the greatest fighter in the world.”

Having just faced a fighter like Mäntykivi and won, becoming great in modern MMA goes much further than attitude and heart. It is becoming more common that every fighter on the roster can now compete in all aspects of the game; whether it be wrestling, striking, submitting.

A well-rounded skillset can ultimately prepare any fighter for what comes through the cage door, and Jones can pride himself on this mantra with Cage Warriors wins via TKO’s, submissions and decision victories. “Everyone at the top is mixing it up and have a well-rounded style,” Jones says, and highlights some differences he’s picked up on between British fighters and those fighting out of the USA.

“I do think that wrestling in schools gives Americans a slight advantage against most fighters but I’m really starting to see a lot of fast, fluid movement strikers rising to the top.” Travelling to Team Alpha Male and mixing up his training will only surround him with top versatile fighters, and as young man still on a journey to reach the top, it is a perfect way to make that climb. “There’s levels to this game and I’m nowhere near peaking,” he says.

Now 8-0, Jones has surely put himself in a position to contend for the Cage Warriors belt in the near future, and exuberates confidence discussing the year ahead.

“In the next 12 months I’m going to keep fighting the best fighter’s I can, win the belt & vigorously defend it,” he says. “At the end of 2020 I’m looking to sign with UFC and start my climb up the ranks.”

He doesn’t look like a man feeling an ounce of pressure from his own expectations, and looks man-made for the MMA life, everything seemingly taken in Jones’ stride. From answering questions, fighting under the bright lights and training hard like a rookie preparing for his first bout.

His love of the game is the motivation, and fortunately he’s got the talent to springboard off his passion. “Winning alone isn’t something I really put much thought into,” he says. “I visualise beating opponents and overcoming their strengths leading up to fights. I love the work, the walk out and the fight itself more than anything else.” 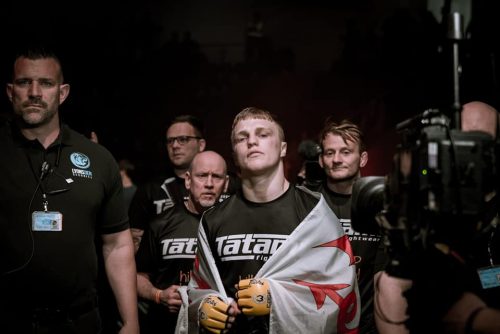 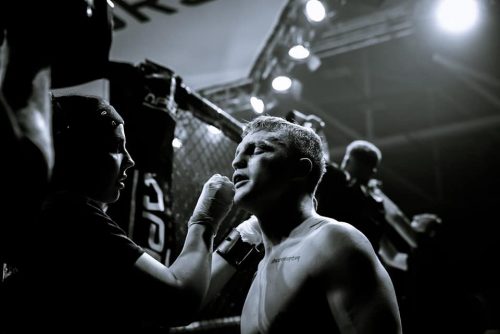 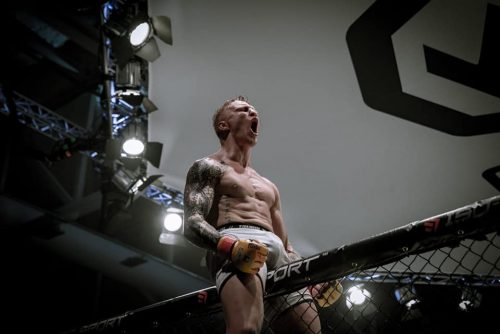 This makes for interesting viewing. A guy who loves the graft, the fight night and everything that surrounds it. Many fighters have come and gone due to not being accustomed to the big stage, and flopping as a result of it. Yet Jones is become a fighter for the occasion, with every one of his fights becoming known for being fought at a high-paced level, pursuing a finish and noticeable hunger for a raised hand at the end of the bout. “People should come to watch me fight because I belong in the cage, my fights are exciting, violent and fast paced,” he says. “I look to constantly finish my opponents and I promise you it’ll be a night you won’t forget.”

Like his fight night performances, Mason “The Dragon” Jones is becoming truly unforgettable. A man on a mission, ready to leave a lasting memory on the best the game has to offer. “I want to fight the best in the world and dismantle them.”

Mason would like to give a massive thanks to his sponsors, supports and army of followers for their continued support: P&P Builders, Tatami Fightwear, Patent Seekers, PKE Nutrition, Hilltop honey, sd Sealants and CCS Scaffolding, 15000v, Rogue Tattoo Parlour, The Lion Hotel & Restaurant