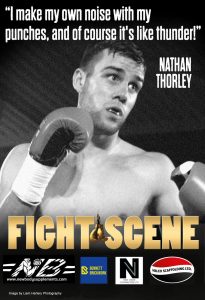 “Without boxing I wouldn’t be the guy I am now, it’s helped me build massive amounts of confidence. Boxing turns a boy into a man.”

Fairwater, the small town pocketed in the western suburbs of Cardiff, is something of an enigma.

Locals will recall that Fairwater provided the picturesque playground for a young Roald Dahl – the author of so many of our beloved children’s books.

But they might also remember the day that a liquored-up local decided to drive a van straight through the front doors of the police station.

Fairwater. A tale of two towns.

With its leafy-look, it’s colourful characters and its Tolkien-esque name, visitors might initially expect Cardiff’s favourite district to be more reminiscent of a fairy-tale village than a gritty, urban champion-making-machine.

But actually, it’s both.

While Fairwater might not cast the largest shadow, its six-foot-four heavy-hitting cruiserweight does.

Nathan Thorley currently sits high up into the highest-ranking cruiserweights fighting out of the UK and prior to his division swap the Welshman stood amongst the top 10 light heavyweights (Boxrec).

“Boxing turns a boy into a man.”

Like many professional boxers, Nathan’s first endeavour into the sport came during his youth.

“I started boxing when I was around nine or ten. I was out walking my dog with my dad and happened to stumble upon Pat Thomas’s (ex British champion) amateur gym in Fairwater. I’ve been boxing ever since. Without boxing I wouldn’t be the guy I am now, it’s helped me build massive amounts of confidence. Boxing turns a boy into a man.”

Nathan is the youngest fighter (excluding Jack Massey, Mikael Lawal and Lawrence Okolie) in the UK’s cruiserweight division to maintain an unbeaten record, boasting an impressive 14 wins and zero losses. 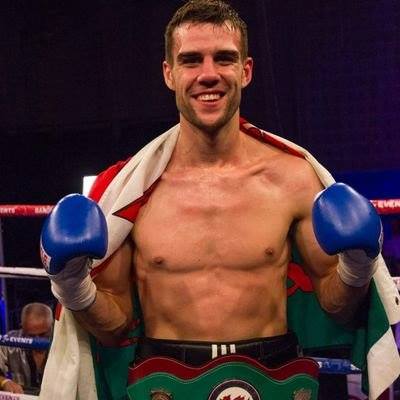 “I’m self-motivated really. The way I look at it is – no one else is going to pay my bills, buy me a house and pay for my trips away. Only I can do that. That’s what gets me off my arse and into the gym.”

In his eighth professional bout, Nathan fought Jermaine Asare for the vacant Welsh title in 2017.

Nathan took the opportunity of being in front of a TV camera to end the fight early, in a truly notice-me style.

“In the second round I threw a strong overhand right that landed beautifully on his left temple. The punch was that devastating it made him do a little dance before he hit the deck, so that stands out as one of the most memorable moments in my career so far.”

Had you not seen the replay, you’d have been forgiven for thinking Nathan had paid a sniper to wait in the crowd at Merthyr Leisure Centre. Or that they were fighting on ice.

Looking back over the last 12 months, it is safe to say that Nathan has slowed in terms of progression.

Since October 2018 Nathan has featured in two fights of impact, with the first coming in the form of a fairly straightforward TKO victory over Jevgenijs Andrejevs.

And the second more recently against Remigijus Ziausys, a seasoned journeyman who has shared the ring with the likes of Dillian Whyte and Derek Chisora.

“He had a head like a ring post, ultimately the fight was a walk in the park as it was to dust off the cobwebs. However, he was a tough opponent, very durable, I knew that he’d traded blows with both Whyte and Chisora, but still I’ve had harder sparring sessions.”

Nathan will be the first to admit that his success in the ring hasn’t come overnight. The Welshman follows a strict regime and is pushed to his very limits by those around him in the gym. 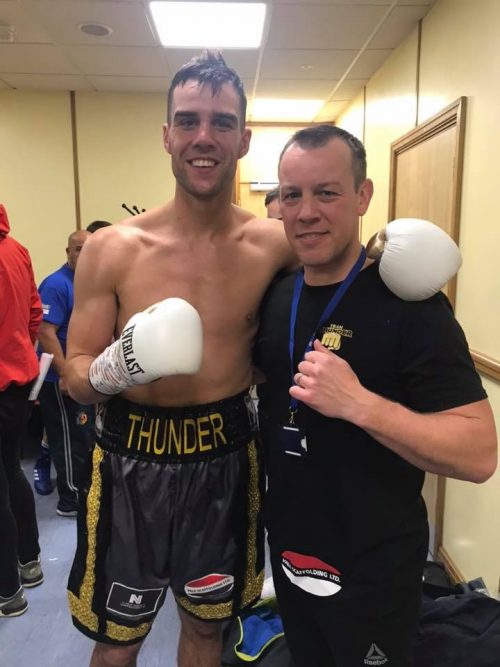 “I train closely with Gary Lockett, we’ll train most mornings at 11.30am and then dedicate two mornings a week to strength and conditioning sessions followed by a run and finishing off with some hill sprints.”

“Training with other top talents like Chris Jenkins in the gym helps massively, because all of us lads have a laugh, but at the same time it’s a competition, whoever can do the most sort of thing and this helps to push us all to our limits and get the most out of ourselves in the gym.”

But what is it that keeps him successful, what keeps him sharp, focussed and determined? What gets him up for the training? His mindset may hold the key

“Winning is my drug. It’s addictive once you get a taste for it. It’s everything, you just want more and more of it. I don’t listen to music in the changing rooms or whilst training, I make my own noise with my punches! And of course, it’s like thunder!”

Looking ahead, we asked Nathan if he had the opportunity to face anyone in the current cruiserweight division, who would it be? It appears that the Welshman’s dream opponent comes in the form of a Ukrainian enforcer.

“For me, a dream fight would be against Usyk, because in my eyes he’s a very clever fighter and the best in this division, even though he has moved up to heavyweight.”

“I’d like to mix it up with the best and to be the best you’ve got to beat the best.”

Aside from Usyk, there are a number of fighters who boast bold claims to be the current P4P number one, with the likes of Vasyl Lomachenko, Canelo Alvarez and Errol Spence Jr all ranking exceedingly well. But who does Nathan put at the top of his list?

“For me its Terrence Crawford hands down. What isn’t there to like about him? He’s fast, technical and he can bang, so in short he’s quality all round”

To finish up, we asked Nathan what makes him stand out amongst the competition and why fans of the sport should come and watch him fight. 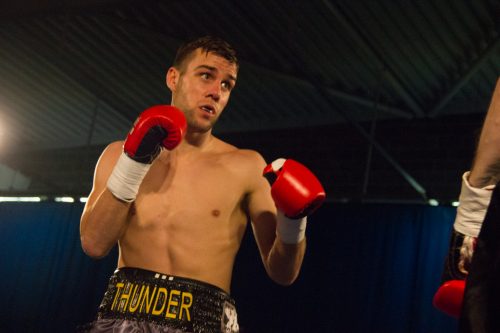 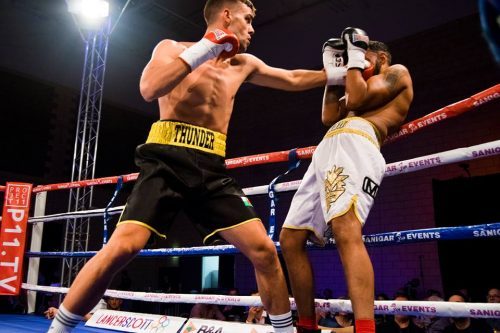 “People should  watch me because I’m exciting. I carry power, but I’m fast & accurate too, so nine times out of ten someone is going over. I’d like to say a massive thank you to all my fans. They’re amazing, without them I would struggle to get out there. Support means the world to a fighter and I will reward the fans with entertainment and with more titles… #teamthunder!”

Welshman looks announce himself on the big stage against Billam-Smith
Nathan Thorley is determined to announce himself on the big stage when he challenges Bournemouth’s Chris Billam-Smith for the Commonwealth Cruiserweight Title on Week 2 of Matchroom Fight Camp in Brentwood, Essex on Friday August 7, live on Sky Sports in the UK and DAZN in the US. 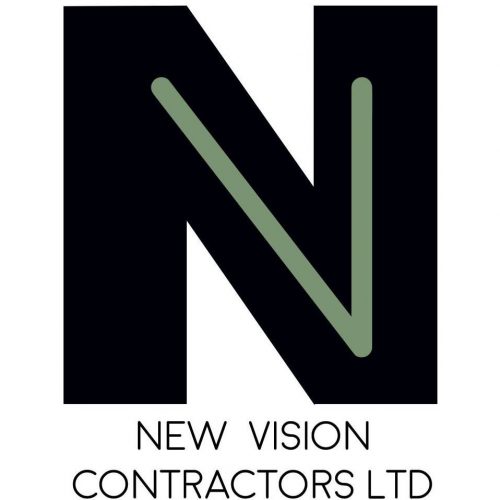 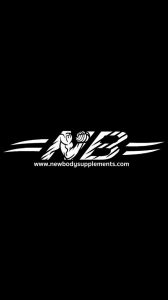 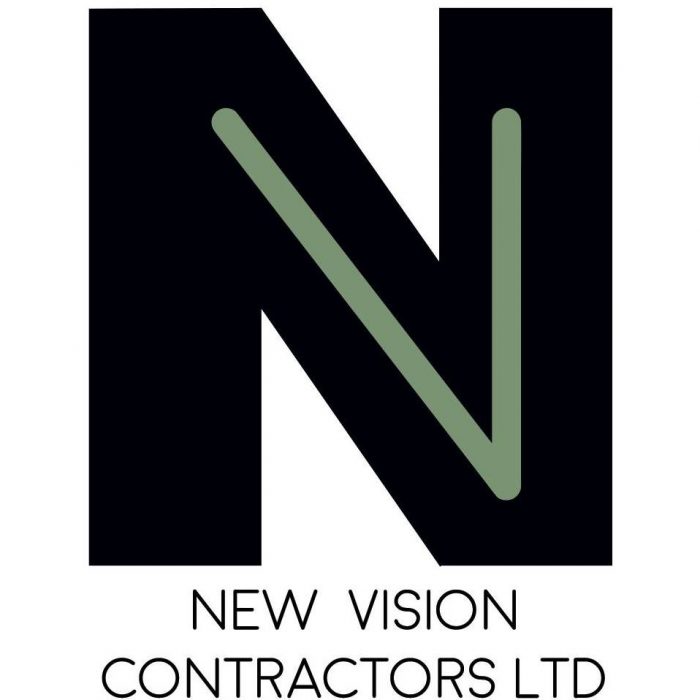 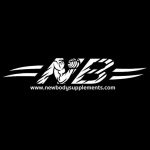