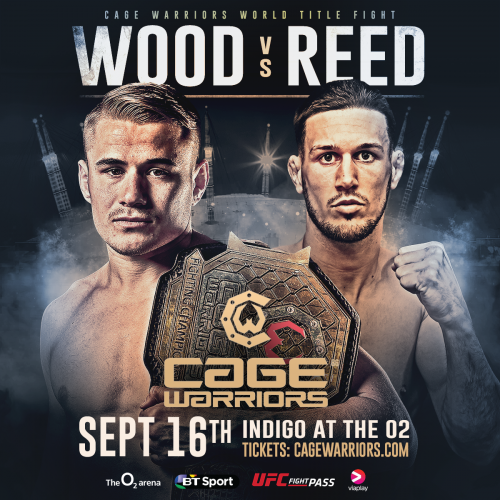 Cage Warriors 86 in London will feature a bantamweight battle of Britain as newly-crowned 135lb champion Nathaniel Wood puts his title on the line for the first time against undefeated Welshman Josh ‘Crazy Horse’ Reed on September 16.

Londoner Wood became the first man from the capital to capture Cage Warriors gold when he knocked out Swiss contender Marko Kovacevic at Cage Warriors 84 in London earlier this month. ‘The Prospect’ is riding a three-fight win streak, defeating Chase Morton (submission), Vaughan Lee (TKO) and Kovacevic (KO) inside the distance.

In addition to the Title fight, Nathaniel Wood’s teammate, Corrin Eaton, will make his Cage Warriors debut when he faces Dean Trueman, who will be looking to get back to his winning ways after having his 3 fight win streak snapped at CW82 in Liverpool.

Also set for action on the card is Welsh welterweight contender Lew Long, who is coming off of three first round victories.

Cage Warriors president Graham Boylan said: “After two sell out shows at our London home in February and June, we’re delighted to head back to the Indigo at The O2 in September.

“Nathaniel has said the belt will not leave his home town, but Josh will bring a lot of support from Wales and is unbeaten as a professional, so I’m anticipating a strong, competitive fight.”