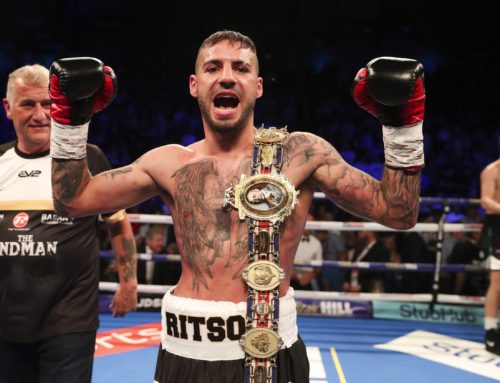 Lewis Ritson will return to the Metro Radio Arena Newcastle on October 13, live on Sky Sports.

The Geordie ace is feeling unstoppable after producing another stunning display of brutal power to destroy Paul Hyland Jr in one round to take home the British Lightweight title for keeps in June.

The ‘Sandman’ put the unbeaten Belfast man away in a similar fashion to the devastating defences against Manchester’s Joe Murray (first round) and Lytham St Anne’s Scotty Cardle (second round).

Ritson’s fanatical support blew the roof off the Tyneside arena in June and the Forest Hall fighter is promising another unforgettable performance in October as he sets his sights on European honours and beyond.

“The most important thing for me right now is keeping busy and I’m delighted to be fighting in an eight rounder on the Khan vs. Vargas undercard in September as well. I’m focused on winning and improving with every fight.

“It’s been a fantastic year for me and I want to continue to build in September and October. I’ve got a brilliant team around me that I trust and I’m confident they can guide me towards more major titles.”

Rising Light-Heavyweight star Joshua Buatsi features as he takes part in his eighth professional fight after landing his first title at The O2. He picked up the WBA International title with a stunning first round win over Andrejs Pokumeiko and will be looking to push on again on October 13.

Foot puts his Commonwealth title on the line for the first time after securing it with an 11th round stoppage win over Scotland’s Jason Easton in Glasgow in March. Davies Jnr dropped Michal Syrowatka three times on his way to avenging his sole career loss and winning back his WBA Continental strap last time out.

David Allen also returns after his ‘life-changing’ win over Nick Webb on the Whyte vs. Parker undercard at The O2 last month. The Doncaster fan favourite produced the moment of his career, sensationally stopping Webb with a devastating right hand in their British Heavyweight title eliminator.

“I’ll be honest I’m counting down the days til we are back in Newcastle,” said Eddie Hearn. “Last time out was something very special and October 13 will be even bigger. Lewis Ritson is a star with a city behind him and now we are on the World title march. His fight and the full undercard will be announced at a press conference soon, fans can expect a packed night with Joshua Buatsi, Dave Allen and a brilliant clash between Glen Foot and Robbie Davies Jnr.” 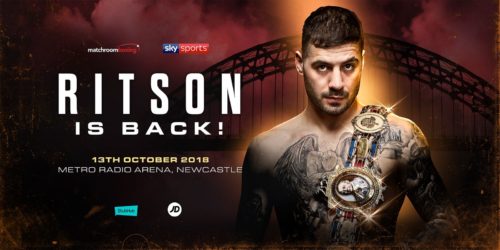