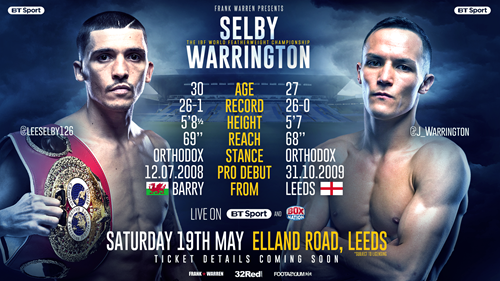 Barry born & bred with a massive following of Cardiff football fans. One of the slickest fighters in British history, Selby has made easy work of everyone below the elite level.

Yorkshire through & through with thousands of Leeds footy fans backing him up at Elland Road tonight. Warrington is a solid pressure fighter who probably lacks a big enough arsenal to hurt Selby, but his home-town advantage – and all those Leeds fans – could spur him on to greatness.

A fight. A big fight.

This is Cardiff v Leeds, boiled down into two men.

Selby defends the title, which makes up one quarter of the available belts in the division.

Warrington challenges for it, hoping to dethrone the Welshman & become the new champ & the latest name in British boxing on the world level.

The winner will likely face Carl Frampton in a huge showdown, before attempting to unify the remaining belts either here or in America.

Frank Warren has taken advantage of old football rivalries in promoting this event, one of many recent title fights to take place on British soil.

Also available on BT Sport. Or down the pub.

Tonight! Ring-walks around 10:15, but get it on early to support the undercard. If you don’t, in the future there may not be any big names left to support. You’ve been told!

Because they hate each other. Or have done a good job in pretending to. Much to the delight of promoter Frank Warren.

Geographical differences side, Warrington feels that the boxing world has side-lined him and that Selby has overlooked him.

Selby did not need to take this fight, since he’s now a massive draw in the US, but he fancied the domestic bust up after MUCH baiting at the hands of Warrington and the rest of Leeds. 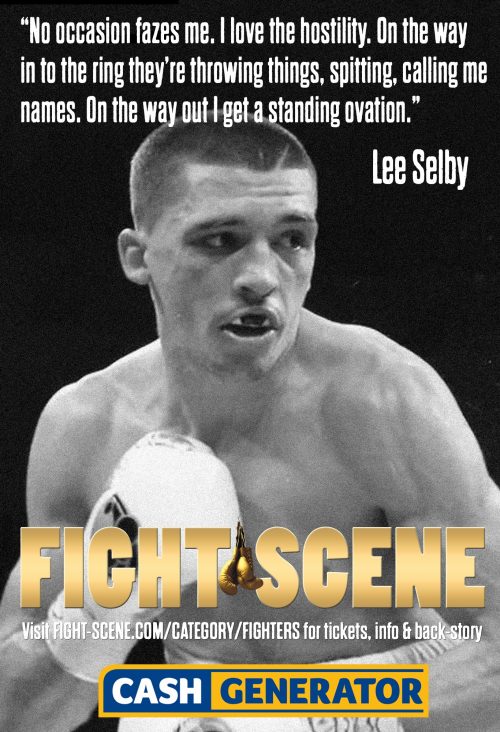