An action packed weekend of boxing was held at Sophia Gardens in the Sport Wales National Centre, 12th & 13th May.

Wales successfully walked away with three silvers and three golds with the stand out performance of the day by Mickey McDonagh (pictured below) in the lightweight division against Thomas Hodgson from England. 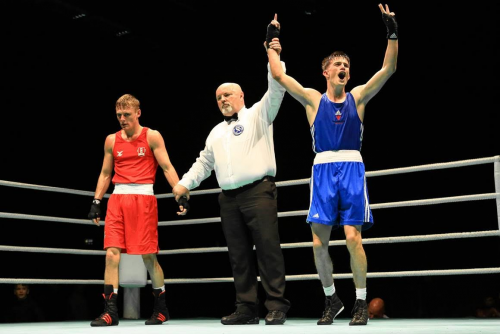 Ashley Williams opened the medal haul on the Saturday with a silver against Scotland’s Aqeel Ahmed. The home favourite and Commonwealth Games bronze medallist from 2014 started briskly against Ahmed, however the Scot was able to pick off the Welshman with single shots throughout the 3 rounds, winning by unanimous decision.

Up next was Lynsey Holdaway, in the women’s light-flyweight against Miriam Zouhou from England.

Holdaway, in the world top ten outboxed Zouhou throughout the 3 rounds and won comfortably in front of her home supporters.

Helen Jones, the up and coming boxer from Portmead took on the more experienced Ebonie Jones, fromEngland in the Bantamweight division. Ebonie boxed really well on the inside and her experience showed throughout the contest even though Helen Jones rallied well and came strong in the final round, it was a unanimous decision for the English female.

In the men’s lightweight, Mickey McDonagh hailing from Merlins Bridge, Haverfordwest continued his impressive rise through the senior ranks with a unanimous decision against England’s Thomas Hodgson.

McDonagh, in his first senior year added the gold to his recent first Welsh Senior title and the Serbia Cup gold he won in April.

Price, the bronze medallist from the 2014 Commonwealth Games and World Youth Silver medallist struggled to find her rhythm throughout the contest but managed to use her experience to win all three rounds, despite a point being deducted for excessive holding in the second round.

In the penultimate bout of the afternoon, Kody Davies the boxer from Blackwood took on the strong Englishman Natty Ngwenya.

In the third Davies endeavoured to use his natural range but the damage had been done and the Englishman ended with a flourish to secure the title.