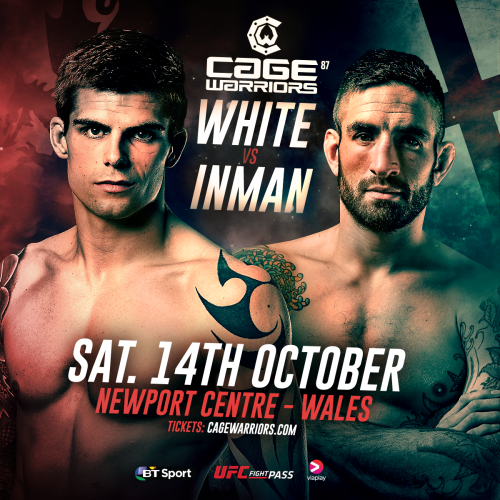 Cage Warriors returns to Wales on October 14 for Cage Warriors 87 at the Newport Centre with eight matchups already confirmed for the event.

Inman has been a major factor in the 170lb division throughout the past 12 months and unsuccessfully challenged for the vacant welterweight title earlier this year.

Now the SBG Manchester man is looking to go on another run of wins to propel him back into title contention once again.

Standing in his way is 27-year-old White, whose two appearances for Cage Warriors to date have produced arguably the best two wins of his career.

White defeated Thomas Robertsen on his Cage Warriors debut at Cage Warriors 80, then followed up that success with victory over Hakon Foss. Both wins came by first-round submission.

Also booked for October 14 is a second welterweight clash, as Ross Houston takes on Aaron Khalid, while lightweight veteran Scott Clist will face off against Richard Williams.

Phil Raeburn will do battle with Aiden Lee at 145lbs, while Martin McDonough will take on Martin Sheridan at 135.

Cage Warriors also reveal that hot prospect Jack Shore will also fight on the card, with his opponent set to be announced at a later date.

Also on the card are a pair of lightweight bouts – Josh Ellis vs Lawrence Tracey and Shaun Luther vs Mason Jones – plus a bantamweight battle between Jason Jenkins and Chris Saunders.