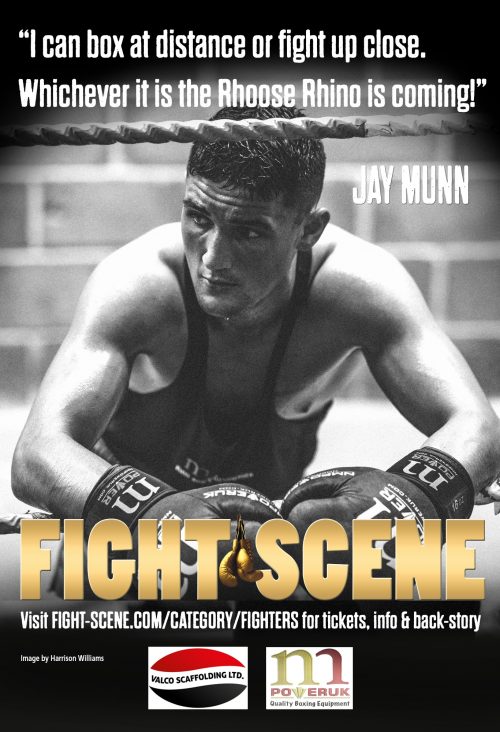 “Boxing has taught me many things like self-discipline and focus and it keeps me off the streets. It’s really made me realize how important it is to keep yourself fit and eat well.

The self-proclaimed Rhoose Rhino: Jay Munn (3-0) has come a long way since hiding his boxing medical forms from his mother as he eyes an ambitious campaign in professional boxing after signing with experienced manager Gary Lockett.

Munn originally started his pursuit of combat glory in the sport of martial arts, whereby he competed as a youngster and achieved high-level status, until boxing presented itself. After making the transition from one discipline to another, the eager-minded Munn truly found his feet.

“After many years of competing at a high level of martial arts I was beginning to get bored of the sport. I kept walking past the boxing gym to get to my martial art class, I used to see the boxers always going in and out of the gym, then one day I finally decided to go to the boxing gym instead” said Munn.

“For weeks I was hiding it from my family (giving up martial arts for boxing) and a couple of weeks into it I was asked to get my medical sorted so I could fight, but she eventually found the form. It really wasn’t easy trying to convince her to let me fight, but when I stepped into that ring I knew from that day onwards that boxing was for me.”

Munn began his amateur boxing venture equipped with a youthful-mind and a competitive experience in the field of fighting. The Welshman persisted through the grueling training and challenging bouts and began to develop a sharp and intelligent style which carried him to new heights. In 2017, Munn grasped the opportunity to represent Wales at the 2017 Commonwealth Games, enjoyed various camps at the EIS Headquarters in Sheffield and won two ABA Championship vests.

Now a licensed prizefighter under Gary Lockett, the charismatic lad from Rhoose looks ahead to a long and exciting professional boxing career. His social media bio reads “I am De Roberto Duran of Rhoose” and in almost every post, the simple statement “I Am Rhino” re-occurs, a warning to his foes and a boast to his followers.

“Winning means a lot to everyone and everyone wants to be a winner, but what I love is the adrenaline rush, the raw of the crowd and the atmosphere which boxing brings. People should come and watch me fight because I’m exciting and I’m an old-school boxer/puncher, and there’s no better school than old-school. I can box at a distance and I can fight up close. Whichever, the Rhoose Rhino is coming.”

The part-time scaffolder and now professional fighter’s weekly regiment showcases the discipline and drive that fighter’s need to be able to succeed in such a demanding sport.

Munn now trains alongside the likes of Alex Hughes, Chris Jenkins, and Nathan Thorley at Llanrumney Phoenix Boxing Club in Cardiff whereby his pedigree in the sport and desire to develop as a top-level domestic fighter is tested daily by world class operators. Current British Welterweight Champion: Chris Jenkins is among those who share a ring with the Rhoose Rhino daily, and under the 30-year-long expertise of Gary Lockett it seems only plausible that the Welshman will follow in the footsteps of his counterparts.

“I’ve got such a great team around me. I’ve got the guidance of Chris Davies and Gary Lockett who have both achieved so much in the sport and have all the experience needed to pass down to me. I’ve got connections across the UK, I’ve got my uncle: Neil Munn who always keeps me grounded and I’ve got the amateur experience to go with it.”

“Boxing has taught me many things like self-discipline and focus and it keeps me off the streets. It’s really made me realize how important it is to keep yourself fit and eat well. In the next five years I want some tough, hard domestic fights. I want the fights that everyone talks about.” 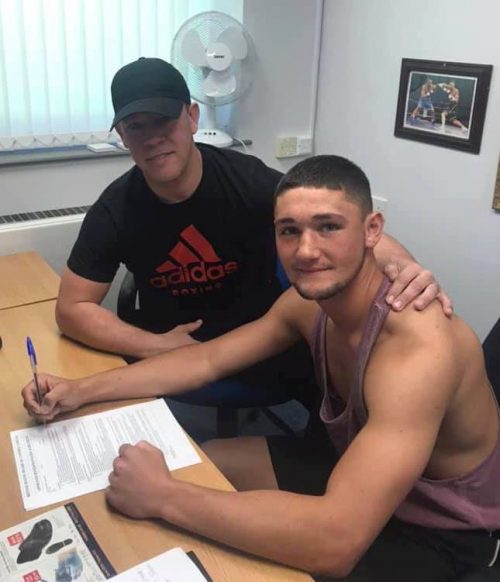 Munn sports a cheeky smile throughout most of his social media posts, has the look of a Josh Kelly type showman and appears to possess all the necessary skills needed to develop into a future champion. His newly found partnership with Gary Lockett, who has trained and managed multiple British champions seems destined to yield success, and alongside a stable of world-class fighters, Munn is not short of quality.

The Rhoose Rhino, the Roberto Duran of Rhoose, or whatever alias he may be called is on a collision course with the top prospects in the UK, in what promises to be an exciting and compelling journey for a fighter who has the appeal of the fans at heart.

“I believe my style is more suited to the pro game. I’m a bit of a slow starter and that was my biggest problem in the amateurs, most of my bouts were over before I could even have chance to warm-up. I’m a counterpuncher and it can take time for me to settle into the contest, although I can bite down on my gum-shield and have a real fight if it comes to it.”

It’s been a while since the likes of Roberto Duran, Sugar Ray Leonard, Marvin Hagler or Tommy Hearns  have graced the squared circle, and although the Rhoose Rhino continues to learn and develop, his hopes of becoming the next crowd-favourite can only excite domestic boxing fans.

Jay would like to thank his loyal army of followers and sponsors for their continued support: Macron, Valco Scaffolding, MPOWERUK, Matthew Atkins Massage, Lyons Den Promotions