“Boxing turns a boy into a man“ 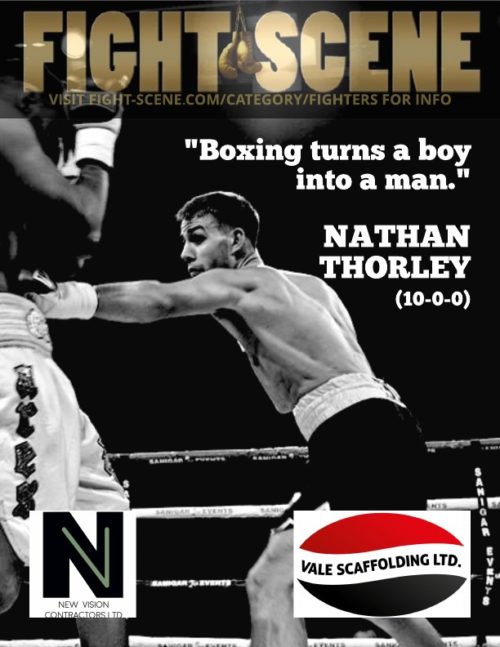 Fairwater, the small town in the western suburbs of Cardiff, is something of an enigma.

Locals will recall that Fairwater provided the beautiful brook that became the picturesque playground for a young Roald Dahl – the author of so many of our beloved children’s books.

But they might also remember the day that a liquored-up local decided to drive a van straight through the front doors of the police station.

Fairwater. A tale of two towns.

With its leafy-look, it’s colourful characters and its Tolkien-esque name, visitors might initially expect Cardiff’s favourite district to be more reminiscent of a fairytale village than a gritty, urban champion-making-machine.

But actually, it’s both.

Sporting tough-men such as John Toshack, Terry Holmes and Joe Ledley all spent a massive portion of their youths roaming the streets between the Dell and Birdie’s Lane, presumably passing through Fairwater Green for pasty-based sustenance on their way to (or not to) Cantonian High School.

And more recently, so did the number ten ranked light heavyweight in the UK (BoxRec)…

“Boxing turns a boy into a man.”  NATHAN THORLEY

Nathan opened up to Fight Scene whilst searching for his 11th pro win:

“I started boxing when I was around nine or ten. I was out walking my dog with my dad and happened to stumble upon Pat Thomas’s (ex British champion) amateur gym in Fairwater. I’ve been boxing ever since. Without boxing I wouldn’t be the guy I am now, it’s helped me build massive amounts of confidence. Boxing turns a boy into a man.”

At 25, Nathan is still younger than most at his level. Fresh. Ambitious. With ten wins and no losses on his record.

“I’m self-motivated really. The way I look at it is – no one else is going to pay my bills, buy me a house and pay for my trips away. Only I can do that. That’s what gets me off my arse and into the gym.”

And at 6’4″, he also out reaches most of his opponents – so far having kept exactly half of his victims at the end of his jab until the final bell – and forcing the other half to bow out early. The very epitome of a boxer-puncher.

After just eight professional bouts (and 70 amateur wins, including a commonwealth medal), Nathan fought Jermaine Asare for the vacant Welsh title last year and took the opportunity of being in front of a TV camera to end things early, in true notice-me style.

In the second round, what had at first seemed like a glancing blow, turned out to be a devastating bomb that had landed on Asare’s left temple, sending him down and out in epic fashion. Had you not seen the replay, you’d have been forgiven for thinking Nathan had paid a sniper to wait in the crowd at Merthyr Leisure Centre. Or that they were fighting on ice.

But this was no fluke. It was the beginnings of a young man looking to make a mark on his sport, propel himself into the top ten and move into contention for even bigger titles. It worked.

When Fight Scene asked Nathan where he saw himself in five years, his response, although modestly stated through his trademark toothy grin, was direct: 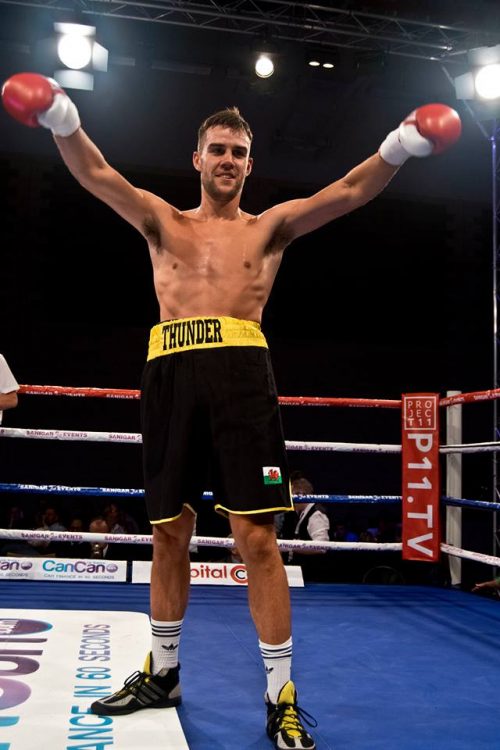 Nathan Thorley is a man of few words. Not because he’s too arrogant or too busy or too important to speak with the public, but because he’s a genuinely down to earth guy with a bit of a shy side.

He will smile politely and chat casually for as long as you like, but he retreats a little when asked to boast about his future. Nathan Thorley doesn’t talk much of the usual over-heard rubbish outside of the ring because, well, he doesn’t need to.

“I want to be world champion in five years – living the dream on a beach drinking pina coladas, haha.”

In April just gone, coming off the back of the Welsh title win and looking for his tenth professional victory, Nathan was disappointed to find out at the weigh-in that his opponent had not made his flight to the UK.

It was the day before the fight and Thorley was just finding out that he’d have to face an unknown entity. But when asked how he felt about the last minute replacement, Nathan simply shrugged and smiled, saying:

When asked who it was he’d be facing, he added:

He hadn’t even googled his name.

So, seeing as promoter Chris Sanigar had just announced the name (Adam Jones) for the gathered crowd of press at Cardiff’s Ice Arena, we Googled it for Nathan, then showed him the screen.

Nathan smiled, nodded, raised his eye brows pretending to show interest, then carried on talking about anything else that sprung to mind.

When Nathan Thorley says he doesn’t care who he faces, he’s a fine example of a fighter who actually means it. 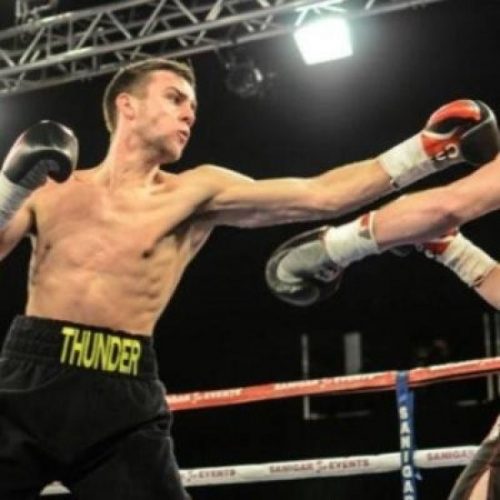 So what’s brought Nathan so much success, so early in his career? Once again, Nathan is specific and literal in his self-analysis:

“The jab is the key tool for me, it takes you into trouble and gets you out of it.”

“Winning is my drug. It’s addictive once you get a taste for it. It’s everything, you just want more and more of it. I don’t listen to music in the changing rooms or whilst training, I make my own noise with my punches! And of course it’s like thunder!”

Going on to give some insight into how his style came about, Nathan then brings up two other tall, rangy superstars of days gone by, that demonstrated their power and timing whilst remaining on the outside:

“As a young lad I loved Ali, but as I got older and more into boxing Tommy Hearns became my idol. And these days, Andre Ward. They are all amazing fighters.”

So, who could the fighting pride of Fairwater end up facing on his way to the top?

In the current British top ten (BoxRec) Nathan is one of only four unbeaten fighters, the other three being…

Buatsi has had just six fights, but is looking promising with four of his wins being by KO

With 14 KO’s, Yarde is the WBO European champion with three defences under his belt

The current British & Commonwealth champ who stopped Frank Buglioni in his last outing, defending his belts in the process.

But before setting up those potentially bigger, more dangerous match ups, there are other fighters in the UK top ten that Thunder Thorley should – and likely will – face off against… notably Buglioni himself (Enfield, 21-3-1), Bob Ajisafe (Leeds, 17-3) and English champ Liam Conroy (16-3-1) in what would be a true battle of Britain, with both the Welsh & English camps commanding an army of fans.

And what of the bigger names? Those champions fighting on the global scale that Nathan hopes to reach by his 30th birthday?

Fellow light heavyweights Sergey Kovalev, Adonis Stevenson and Badou Jack have set the world on fire lately, in what has recently become one of boxing’s most explosive and watchable divisions, bridging the gap perfectly between the heavier hands of the heavyweights and the faster feet of the middleweights. 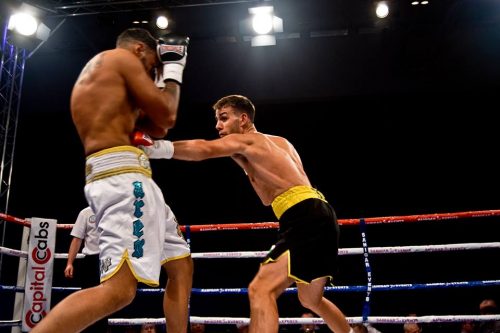 At this early, untested stage of Nathan’s career, it’s difficult to say exactly how he might fair. With his massive jab, his ability to stay on the outside and his spear-like, rangy right cross, he’s a genuine danger to the likes of Conroy, Ajisafe, Buglioni & Buatsi. But up against the dominance of Johnson & Yarde he may be dragged into territory previously undiscovered.

Thorley will need to be at his absolute best when this happens, coming into the ring with world-class levels of fitness and focus and being prepared to do whatever it takes – and take whatever is given since both men are bangers who will look to check his chin – if he wants to leave the ring with his zero still intact.

And at the world level, only time will tell. At 25 Nathan still has time to grow, mentally and perhaps even physically.

Fight Scene think that the man who had 90 amateur bouts before turning pro at the age of 22, and who made easy work of a Welsh title by 24, has potentially seen enough and learned enough in his early career, to achieve his dreams over time.

If his momentum continues, Nathan Thorley possesses the tools, the technique and the temperament to take it all the way to the top.

Before leaving, we asked Nathan if he had anything to say to his fans. Both the loyal ones that have been with him since the start and those he hopes to pick up over his proposed five year journey to world stardom. Finally, he opens up a bit. Even showing off. 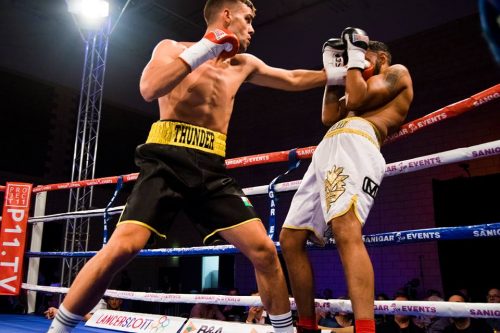 “I’m the man with the master plan – you better bring a gun to beat me.”

If he didn’t burst out laughing straight afterwards, it would have sounded almost as if he meant it. But the truth is, he does. Deep down he knows he’s destined for big things, even though he only brags about it when repeatedly asked to provide a journalist with an easy sound bite.

“People should come to watch me because I’m exciting. I carry power, but I’m fast & accurate too, so it’s always going to be entertaining. I’d like to say a massive thank you to all my fans. They’re amazing, without them I would struggle to get out there. Support means the world to a fighter and I will reward the fans with entertainment and with more titles… #teamthunder!

Fight Scene finish up by trying to push Nathan into committing to a dream fight. So who does he call out…?

No one. He just smiles. Calmly. Playing the always-cool, never-too-cocky young man who saves it all for the ring.

Like his hometown of Fairwater… Nathan Thorley is something of an enigma.